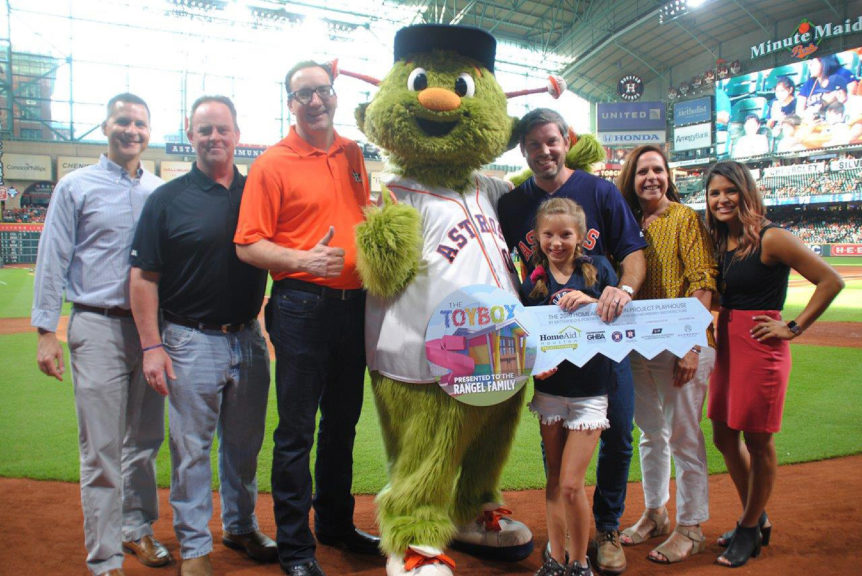 The Rangel family was cheered on by thousands of Houston Astros fans as they were presented the ceremonial key to the 2019 HomeAid Houston Project Playhouse, named The Toy Box Playhouse, on the field prior to the Astros vs. Angels game on July 7. This whimsical creation was designed by Newberry Architecture and constructed by Satterfield & Pontikes.

This is the 13th anniversary of HomeAid’s Project Playhouse, a fundraiser that builds hope and homes for Houston’s homeless community. Project Playhouse raised nearly $100,000 for HomeAid’s mission, to build new lives for homeless families and individuals through housing and community outreach. Claudia Tax, design associate with Newberry drew the winning ticket. HomeAid partners every year with the Houston Astros and the Astros Foundation on this charity fundraiser.

Newberry’s design included a number of play areas such as a rock climbing wall, a TV and desk area with a mini fridge, a painting and chalkboard station, and a Minute Maid juice bar area for kids to “sell” juices. There was also a loft above with a play-net that can be accessed by a built-in ladder or the rock climbing wall. The exterior featured a slide that is accessible from the interior loft. The Toy Box Playhouse also included air conditioning and interior/exterior decor that enhances the amenities.

“The months leading up to the drawing of the playhouse winner and the key presentation was an incredible run for the whole Project Playhouse team,” said Patrick Mayhan, president of HomeAid Houston. “The unique design and all of the interactive features generated a load of excitement at every game it was displayed. We can’t thank the Astros, the Astros Foundation and the entire design/construction team enough for creating such a memorable year.”

Numerous vendors and suppliers came together to donate materials and services to help in the construction. These companies included R.B. Hash, Chavez Carpentry, Gonzales Electric, Trifection, The Sherwin-Williams Co., Bamex Painting, Greco Structures, Marvin Windows and Doors, and Mirror Gallery, among others.

“Gathering members of the Playhouse team together on the field was the perfect way to celebrate another successful year for Project Playhouse,” said Carole Brady. “It brought the entire Playhouse team together to honor the builders, sponsors, vendors and volunteers who made this a World Series success. A huge thank you to the Astros, the Astros Foundation, Satterfield & Pontikes and Newberry Architecture!”