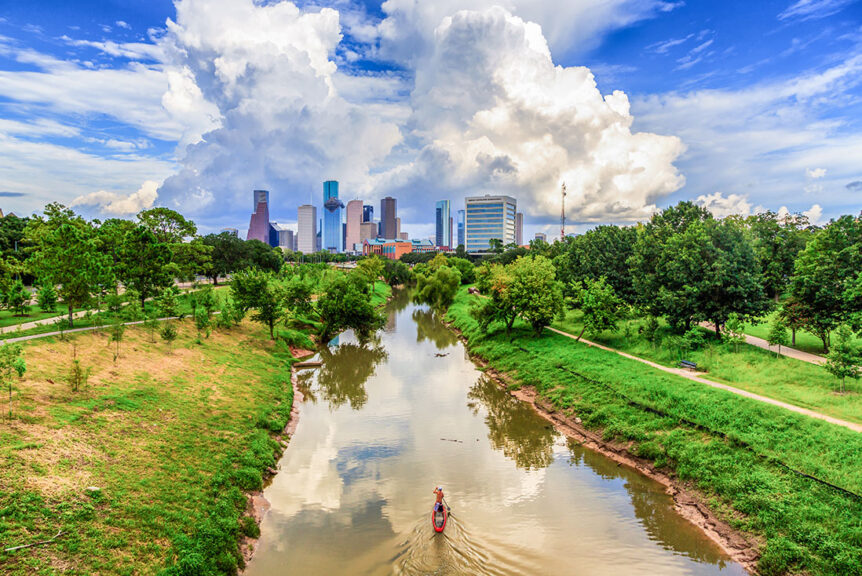 Last month, the United States Army Corps of Engineers (USACE) released an interim draft of its Buffalo Bayou and Tributaries Resiliency Study. The purpose of the study is to evaluate the current conditions of Buffalo Bayou and the Addicks and Barker reservoirs, and to identify, evaluate, and recommend actions to address the changed conditions, including potential modifications to the Buffalo Bayou system to reduce flood risks to people, property, and communities.

We believe that this report could be the basis for the federal funding of future drainage infrastructure projects in Harris County.

There are several items of concern within the Interim Report. And although the USACE states the purpose of the study is to develop and evaluate a range of alternatives based on feasibility, performance, cost, and benefits, it proposes projects like a third reservoir and channelizing Buffalo Bayou. Both of which have been studied for decades and with the conclusion that they would be extremely difficult to build, would take decades to construct, and would be extraordinarily expensive.

The interim study did not move forward with alternatives like flood tunnels and improving the existing reservoirs. These projects would be feasible and actionable. Excavating the Addicks and Barker reservoirs would be shovel ready projects that could start quickly and provide benefits soon after starting.

While the construction of flood tunnels would not be as fast, the Harris County Flood Control District is already underway on a second study on their effectiveness and design. Tunnels also have a proven track record as we have seen the cities of Austin and San Antonio employ the use of tunnels for flood mitigation with great success.

The importance of the Interim Report to our region’s future for flood mitigation cannot be overstated. The report says that the USACE released it to solicit public input to “help inform decision-makers as they weigh the benefits and costs of alternatives or the individual measures that comprise an alternative.”

However, at the time of this printing, they only provided 30 days for public comments which does not allow the public and stakeholders enough time to provide the USACE with meaningful and accurate input.

The GHBA has submitted a letter requesting an extension of the public comment period to December 31 and included comments on the projects that were considered and advanced. In addition, Houston Stronger—a coalition of dozens of associations and non-profits concerned with flood resiliency in the Houston Region, of which the GHBA is a founding member—has submitted a letter and has several workgroups drafting comments as well.

We will continue to monitor this study as it moves forward and will work with our stakeholder partners to develop a workable solution.