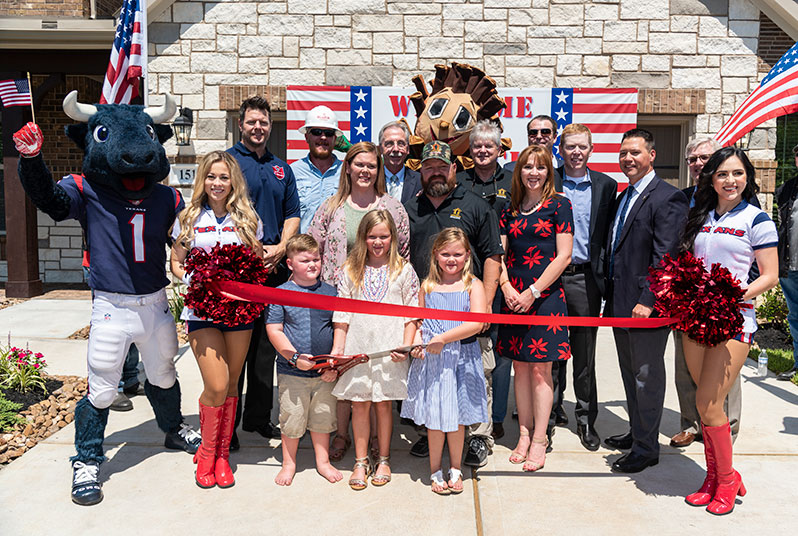 U.S. Army Sergeant John Kadleck and his family joined representatives from Operation FINALLY HOME, Beazer Homes, The Howard Hughes Corporation®, GHBA and the Houston Texans, along with The Woodlands community recently to celebrate the dedication of their new custom-built, mortgage-free home. It is the 148th home dedication for deserving wounded, ill or injured veterans through Operation FINALLY HOME.

“It is so special to see so many members support our veterans as well as experience the impact that the donations raised from our Benefit Homes have on our communities.”Casey Morgan, GHBA CEO

The special dedication ceremony included comments from honored guests as well as the Kadleck family. Following the ribbon cutting, John and his wife, Erin, and their children received the keys and saw their completed home for the first time.

“It’s hard to really fathom that this is happening even though we’re standing in front of the house and we watched it get built,” Kadleck said. “I just wanted to say thank you to everyone who came out today… it’s really humbling. This house is amazing. It’s a huge blessing, but to me, it’s not so much validation for me and my service but validation for my wife, Erin and her service that’s she’s given me over the years. I love you and I’m looking forward to creating a lifetime of memories in this house with you.”

Casey Morgan, GHBA executive director, participated at the ceremony as well. “It is so special to see so many members support our veterans as well as experience the impact that the donations raised from our Benefit Homes have on our communities,” said Casey. His first tour of duty began in 2005 when he volunteered to transfer to a National Guard unit that was on orders to deploy to Iraq. While there, he served as a medic and X-ray technician. When he returned from this tour of duty in 2006, he met his wife Erin. They married in 2007 and in 2008, he was deployed to Afghanistan and was assigned to the Korengal Valley, known as the “valley of death.”

In 2010, he and his wife welcomed twin girls. Three months later, Kadleck was deployed again. During a firefight, he fell off an MRAP and fractured two vertebrae in his back. He returned home injured both mentally and physically.

In 2012, Kadleck went before the Medical Review Board and due to his PTSD and back and neck issues, he retired from active duty in September 2013. Following retirement, he began a rigorous program of prolonged exposure therapy that has changed his life.

During his time with the Army, Kadleck served three deployments. In his service, he received numerous commendations including the Combat Action Badge, Afghanistan Campaign Medal, Iraq Campaign Medal, Army Commendation Award and more. Today, Kadleck is taking online classes from Liberty University with a focus on divinity and Christian counseling. John and Erin are both involved with Christian organizations that help other veterans and their families along with being the proud parents to their three children.
The Kadlecks were surprised with the announcement they were receiving a new home at the Houston Texans game Dec. 10. The family was on the field during the first quarter to play a video board game “Texans Press Your Luck” and on the final spin, the mystery prize revealed was their new home! The community then wrote “Notes of Love” on the studs of their home March 23, 2018, before they were wrapped in drywall. This way, the Kadleck family will feel the love of the community each time they walk into their new home.