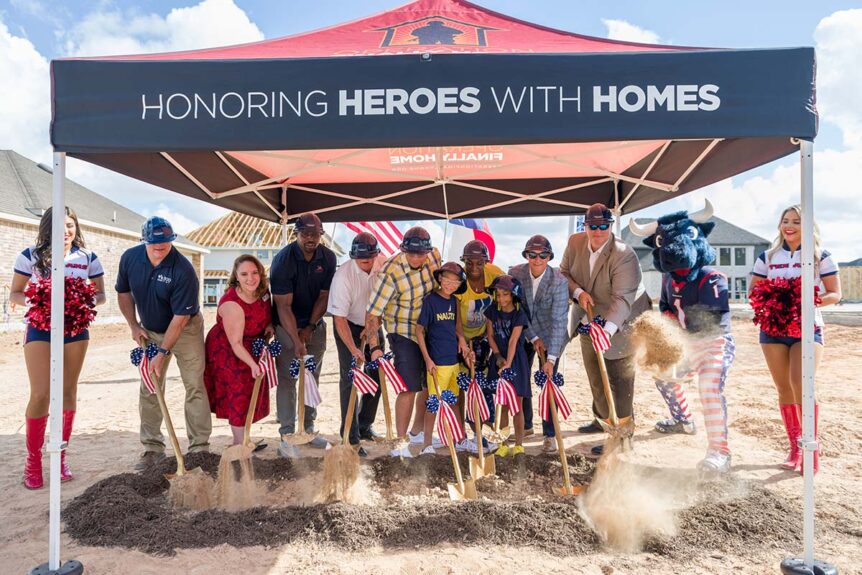 U.S. Army SPC Fernando DelPozo Jr. and his family were surprised on Wednesday, June 22, with the news they are receiving a new mortgage-free home in Jordan Ranch in Fulshear. A special groundbreaking ceremony followed the surprise at the homesite in Fulshear.

U.S. Army SPC Fernando DelPozo Jr. and his family thought they were meeting Operation Finally Home and Highland Homes officials for an interview as the next step in their application process.  When the builder “got called to another meeting,” Lee Kirgan, Operation Finally Home vice president, asked to show them around the Jordan Ranch subdivision. The DelPozo family was surprised when they arrived at the homesite and were met by the Houston Texans cheerleaders, TORO and Houston Texans legend Moran Norris who broke the news that they have already been selected to receive a new, mortgage-free home from Highland Homes!

Presenting the DelPozo family with a mortgage-free home wouldn’t be possible without the collective efforts of Highland Homes along with their trades and suppliers, Johnson Development who donated the lot, along with financial and marketing support from the Houston Texans, USAA, and the Greater Houston Builders Association (GHBA) as well as the Fulshear community who will welcome the DelPozo family.

In coming months, Operation Finally Home, Highland Homes and the entire build team will continue to celebrate milestone moments in the construction process of the DelPozo family’s home. Future events will include a Notes of Love event (during which neighbors and community members write notes of love and encouragement on the walls and studs of the home) and a dedication event when the home is completed.

ABOUT U.S. ARMY SPC FERNANDO VELASCO DELPOZO JR. | U.S. Army Specialist Fernando DelPozo Jr. grew up in Fort Smith, Arkansas, and was raised by his grandmother who instilled strong values of loyalty, respect, honor, and always take care of family.  DelPozo joined the army in 2009, and he was stationed in Tacoma, Washington, throughout his five-year military career, including a one-year combat deployment to Afghanistan.

DelPozo was trained as a gunner and served as a lead gunner during his deployment. While in Afghanistan, his convoy was attacked twice within a six-month period. During the second attack, DelPozo was in a vehicle which was directly above an IED when it detonated. The vehicle was flipped, and he suffered significant injuries, forcing a medical evacuation. He was hospitalized for treatment and was temporarily paralyzed from the waist down.

The IED explosion left him with a traumatic brain injury (TBI), chronic back pain which restricts movement and causes him to use a cane, arthritis throughout his body, combat-related PTSD, and anxiety.

For his service, DelPozo was awarded a Purple Heart, an Afghanistan Campaign Medal with campaign star, an Army Achievement Medal, a National Defense Service Medal and a Global War on Terror Service Medal, Combat Action Badge among many others.

DelPozo met his wife, Adreena, while training in Tacoma in 2011. The couple was married during DelPozo’s R&R from deployment in 2012 and moved to Texas following DelPozo’s honorable discharge from the military. His doctors suggested a warmer climate would allow for better quality of life with his chronic injuries.

The couple has three children and currently lives in Hockley, Texas. Adreena is pursuing a bachelor’s degree in nutrition, while homeschooling the oldest two children.

Despite his limitations, Fernando is active with fellow veterans as he reintegrates himself back into society and enjoys hiking, fishing, and cooking.