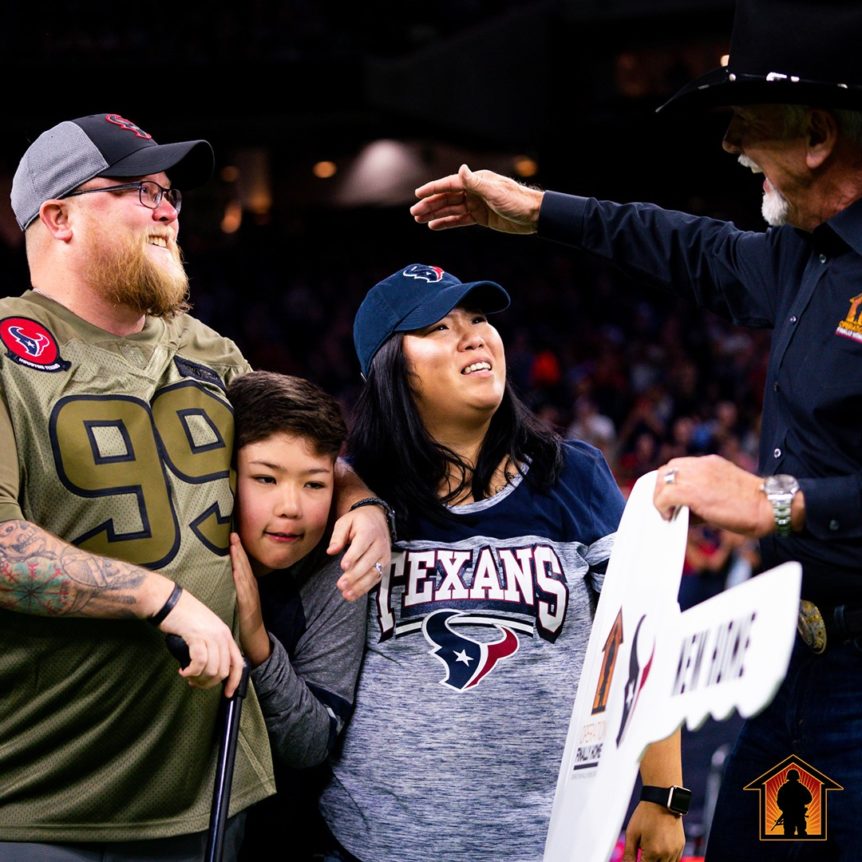 U.S. Army SFC Justin Reuber and his family received keys to their new mortgage-free home Friday, May 22 during a small, socially-distanced dedication ceremony at the homesite in Hockley, Texas, in the Centex community of Windrow. In the first of its kind event for Operation FINALLY HOME, the ceremony was recorded onsite and streamed on Wednesday, May 27 as a Facebook Premiere video on the organization’s page, facebook.com/OperationFINALLYHOME. This format allowed supporters from across the globe access to the celebration, while maintaining a safe and socially responsible environment for the family and limited guests onsite.

The home was built by the PulteGroup’s Built to Honor program with the support of the Houston Texans and GHBA members who donated their materials and services.

Prior to the event, Operation FINALLY HOME Executive Director Rusty Carroll said, “We’re so excited to be able to celebrate the Reuber family with a virtual dedication. This celebration is different than anything we’ve done in the past, but we’re thankful to be able to share the event with supporters all around the country.” Carroll went on to thank the entire team that made the home’s completion possible during the difficult circumstances due to social distancing.

The Reuber family was surprised with the news they were receiving the home during a Houston Texans game in November 2019. During the game, Reuber participated in a “Finish the Lyric” contest where he was tasked with guessing song titles with the word “home” removed. Songs included “Take Me Home Tonight,” “Sweet Home Alabama” and “I’m Going Home.” After guessing correctly, Reuber’s mystery prize was revealed – a brand new, mortgage-free home from Operation FINALLY HOME (see video here.)

After U.S. Army Sergeant First Class Justin Reuber enlisted in 1999 he served back-to-back-to-back tours in Iraqi combat zones with less than a year at home between.

Five days before he was to return from his final deployment in Iraq, Reuber and his convoy were conducting a routine check on an Iraqi police checkpoint. The Iraqi police abandoned their post, leaving their equipment and vehicles behind. Insurgents detonated on Reuber’s platoon, striking three of their four vehicles. There were massive casualties resulting in two fatalities and nine with injuries, including Reuber. He suffered a broken hand, broken leg and shrapnel wounds. He returned home and was assigned to become a military recruiter. While riding his motorcycle, a truck ran a red light and struck Reuber at a speed of 55 mph. In addition to breaking the same leg he had previously broken in Iraq, Reuber had a shattered pelvis and shoulder, broken ribs and a severed femoral artery. He remained in a coma for 42 days.

Due to his prior combat injuries, Justin contracted an infection in his leg following the accident which ultimately required amputation. He also suffers from Post-Traumatic Stress Disorder (PTSD), Traumatic Brain Injury (TBI) and migraines.

For his valor, Justin received many accolades including a Purple Heart, Combat Action Badge, Iraq Campaign Medal with three campaign stars and many more.

Reuber medically retired after 16 years of service. He currently resides in Cibolo, Texas, with his wife, Hana, and their three children. Justin is a massive sports fan, and enjoys hunting, fishing and collecting sports memorabilia.

About Built to Honor® | PulteGroup’s Built to Honor® program recognizes and thanks returning military personnel who have been injured during their term of service by providing mortgage-free homes to veterans and their families. Launched in 2013, the program has built and donated more than 55 homes across the country. Built to Honor works in partnership with nonprofit organizations to identify veteran candidates. For more information about Built to Honor, go to builttohonor.org. Follow Built to Honor on Twitter: @BuiltToHonor and Facebook.com/BuiltToHonor.

About Greater Houston Builders Association | The Greater Houston Builders Association, chartered in 1941, is a trade organization whose members are involved in the development, homebuilding and remodeling industries in 11 counties in the Houston area. The association is the 4th largest builders association in the country and the largest in Texas. GHBA is the voice of Houston’s residential construction industry, serving their members and the community through education and advocating professionalism and quality housing. The association also interacts with the government, community and general public to enhance the business climate for its members and to provide quality obtainable housing to the community it serves. The association is also active in community outreach and charitable events.

About the Houston Texans | The Houston Texans were inducted the NFL’s 32nd franchise on Oct. 6, 1999 thanks to a city-wide effort spearheaded by franchise founder and late owner Robert C. McNair and current Co-Founder and Senior Chair Janice McNair. The Texans have since evolved into Forbes Magazine’s 19th-most valuable professional sports franchise in the world with an estimated value of $2.8 billion and are annually among the Houston Chronicle’s Top 100 places to work in the city. The Houston Texans are the only expansion team to have won its first game, defeating Dallas 19-10 on Sept. 8, 2002 and have sold out every preseason, regular season and postseason game in franchise history, donated more than $32 million back to the community through the Houston Texans Foundation and won AFC South division titles in 2011, 2012, 2015 and 2016. NRG Stadium, the NFL’s first retractable-roof stadium, is the home of the Texans.