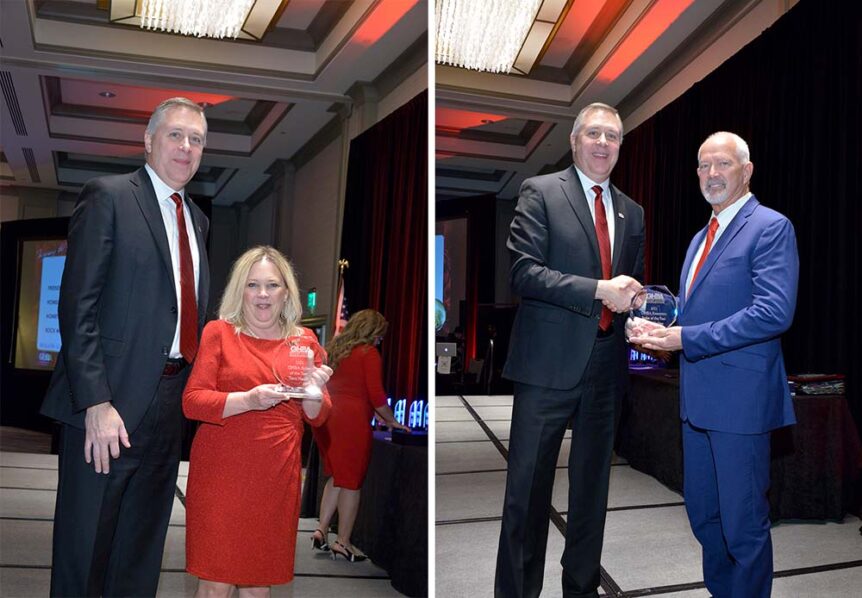 Congratulations to GHBA’s 2021 Spikes of the Year! These annual membership awards were presented at the Installation Celebration in January.

“Members are the lifeblood of the GHBA, and peer-to-peer recruiting is key to strengthening the home building industry,” said GHBA Membership Director Cynthia Fagan. “Thank you to all our Spikes for your tireless efforts to grow your association. These wonderful people are truly some of GHBA’s member champions, and we appreciate them, our ambassadors and leaders who want to see our association and industry strengthen and grow.”

Terry Nesch has been a member of the GHBA since 2017. Her desire to meet new people within the industry inspired her to immediately become an active member. “I am so impressed with the professionalism and energy of the GHBA and its members,” said Terry. “This membership has provided me with a multitude of opportunities to network and share knowledge within the industry.”

Terry was appointed to the Custom Builders Council board in 2018, and at the same time began working with Toner Kersting at TONER Home Matters.

“Toner has always been a great supporter of the GHBA,” she added. “His company’s involvement and support of the GHBA has also allowed me to take part in a variety of roles.”

Terry supports the GHBA in many ways. She contributed to the GHBA video testimonial campaign in 2020. She was the Membership Committee chair in 2021. Terry is currently serving as the Retention Committee chair and is a member of the GHBA board of directors. Terry has also been a huge supporter of HomeAid Houston through their HALO fundraiser.

What Terry has to say about GHBA membership:

“One of the many things that impressed me about the GHBA was the fact that I was told from the very beginning that the GHBA is a business development friendly organization. That statement has proved to be true… if you get involved. That is the ‘secret sauce.’ Get involved, show up, have fun, meet people and learn all that you can with the multiple education opportunities as well.”

Shortly after arriving in Houston in 1999, David joined the GHBA. He immediately joined the Associate Council where he was asked to serve on the board and later became president in 2008.

David has also been active in HOME-PAC and on the Retention Committee. He joined the Membership Committee where he served as the chairman in 2007 and 2022. David also serves on the Northern Counties Builders and Developers Division board.

“I attended every meeting and function I could,” said David. “I attended classes offered by the association to learn more about the building industry and I earned my CGA designation.”

David also has a philanthropic commitment. He became involved with the Frank Aranza Adopt-a-Family Project, where he was honored to play the part of Santa Claus for several years, and he is currently serving as chairman of the HomeAid Works committee.

After nine years of serving, learning, attending association functions and staying involved, David was honored with the Associate of the Year award in 2009.

What David has to say about GHBA membership:

“Why not make the most of your membership now, before you wake up next year and realize you have missed another year of opportunity? And if you are not a member yet, what are you waiting for?”