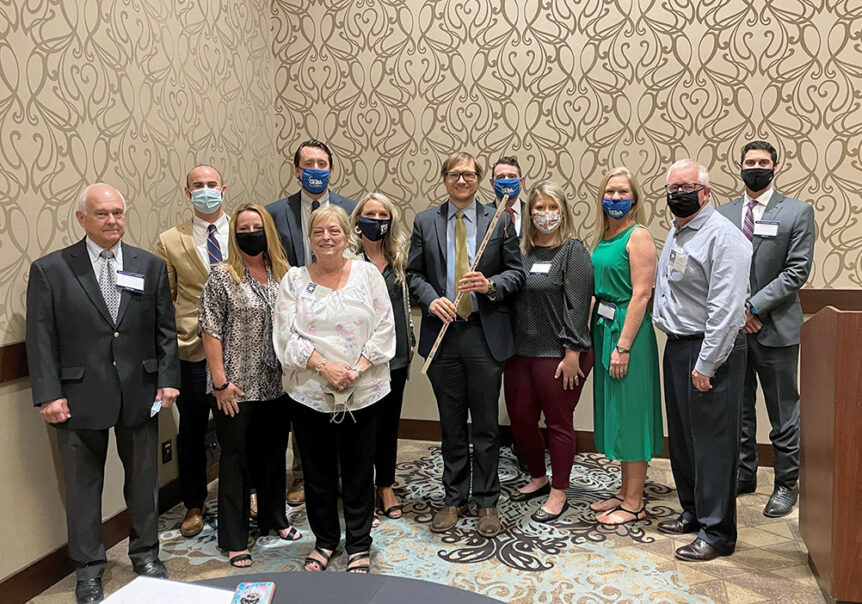 On Tuesday, April 13, GHBA members participated in COVID-19’s version of the Texas Association of Builders’ Rally Day in Austin. With health and safety protocols still the highest priority and wanting to be a responsible community partner, this year’s edition was much smaller than it has been in the past.

Historically, we would have taken three busloads of roughly 150 GHBA members for a day of meetings at the Capitol with our state delegation members. This year, we had 30 members make their own travel arrangements and gather at the Hyatt Regency where elected officials and staff met with us to discuss issues and legislation that affect the housing industry.

We were not shut out of the Capitol entirely though as several elected officials requested that we meet with them in their Capitol offices, so two small teams of GHBA members made their way to the big pink granite building to meet with members on their turf.

In addition to our meetings in Austin, we were able to hold a Virtual Rally Day on April 19 with 11 separate meetings with delegation members via Zoom.

Each session, Rally Day is a special opportunity for our members to meet and directly engage with our state delegation members to advocate for the homebuilding industry. Although this Rally Day took a different form and was held during a much busier point in the session, the GHBA was still able to successfully share our message of housing affordability and home ownership with our elected officials.

The Legislative Session Heats Up

It is hard to believe, but the legislative session will adjourn Sine Die (end of session) on May 31. And while there is less than a month remaining in the 140-day session that began back on January 12, the next few weeks will see a frenzy of action with the House and Senate passing more than 1,000 bills that will be sent to Governor Abbott’s desk for his decision to sign those into law or veto them.

There is only one bill that the legislature must pass each session: The Budget. The budget funds the state’s operations for the two-year biennium following that session. This session the budget originated out of the Senate and has been designated as Senate Bill (SB 1). The chambers alternate the responsibility of introducing the bill each session.

Now that both chambers have passed SB 1, they must work together to reconcile a compromise before it can head to the governor’s desk for his final approval. The next step is a conference committee. The Speaker of the House and the lieutenant governor each chose five members to represent their colleagues in negotiations towards a resolution.
Those 10 members, along with the Speaker, lieutenant governor and the governor, will work for the next few weeks to resolve their differences on spending priorities and methods to arrive at an agreement. If they cannot reach a deal by the end of session, Governor Abbott will be obligated to call a special session to complete a budget for the next two years.

As the session winds down, there are several mandated deadlines for action on legislation and members will be scrambling to save their bills at the last minute. The deadline for the House to pass a majority of the remaining House bills or joint resolutions is May 13 at midnight. There will be thousands of House bills that will not meet that deadline and will be considered dead when the clock strikes midnight.

Over the last month, the legislature will continue to debate major priorities facing our state, including pandemic response and issues related to power and electric service that resulted from Winter Storm Uri. Along with those issues, there are more than a thousand pieces of legislation that have been filed that could impact our industry, and the GHBA Government Affairs team will remained engaged with our delegation in Austin to protect housing affordability for our region.

After disasters like Hurricane Harvey and during the pandemic, city inspection departments around our region were either shut down or slowed down for extended periods of time. And while they currently have the authority to use third party inspectors, many cities chose not to use third-party inspectors to help alleviate the backlog in the inspection/permitting process, which caused even further delays.

These delays can add thousands of dollars to the cost of a project, negatively impact fiscal timelines and requirements, and slow economic development for cities.

Outside of disaster times, most builders would gladly continue to pay cities their current inspection fees for the ability to pay a third party to conduct their inspections because they are more predictable.

SB 877/HB 2548 would require cities to accept independent third-party inspections by qualified professionals during a declared disaster to help tackle the backlogs experienced in disaster areas. Using this tool will reduce project wait times and keep the residential construction industry operating as efficiently as possible during declared disasters.
SB 877 has passed the Senate and will be sent to the House. HB 2548 was heard in the House Committee on Urban Affairs.