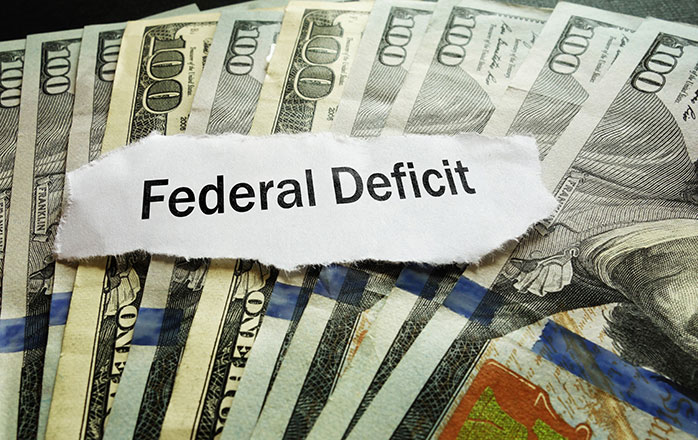 When the Congressional Budget Office made its June 2017 forecast of our fiscal future, it projected a deficit of $689 billion in FY2019. The deficit is now poised to be $1.2 trillion, a dramatic and profound change that is hard to overstate.

One major reason for the growing deficit is that the GOP tax cut that passed in late December is estimated to reduce revenue by $1 trillion over the next decade, even after pro-growth economic effects are factored in. The other reason is the budget deal passed by Congress in early February, includes $300 billion in new spending over two years, along with $90 billion in hurricane relief, fully financed by larger deficits.

This is a stark reversal from the years 2010 through 2016, when congressional Republicans insisted on spending cuts and the Obama administration insisted on raising taxes (by allowing some of the Bush administration tax cuts to expire). Those steps, combined with an improving economy, cut the budget deficit from nearly 10% of GDP in 2009 to less than 2.5% in 2015. What does this abrupt fiscal change mean for the economy in the near term, medium-term and long-term?

In the near term, economic growth should be quite strong. No matter what assumptions are made, and which economic models are used, GDP growth over the next 18 to 24 months will be about half a percentage point higher than it would have been absent these twin expansionary policies. After all, between tax cuts and the boost to spending, close to $500 billion is being injected into the U.S. economy over the next year! Even in an economy near full employment, this will boost growth and reduce the likelihood of a recession to a minimum.

In the medium-term, things are a bit murkier. The big question is whether the economy has room to grow without generating inflation—and how the Fed will respond. With unemployment near 20-year lows, it is unknown how close the economy is to full employment. If it is close, inflation is likely to worsen. But if the U.S. has more growth potential, due to more corporate investment in plant and equipment, reduced regulation, and more workers coming from the ranks of those that dropped out in years past, the Fed could raise rates more slowly, allowing the expansion to run longer because inflation would be subdued. In addition, there is also fear that the Powell Fed will proactively raise rates too fast simply to prove its inflation-fighting-chops and needlessly cut short the current expansion.

In the long-run, the annual deficit is going to be worse than at any time other than during recessions or wars. This not only reduces the ability of the government to fight the next recession with a big dose of fiscal stimulus, but higher debt service costs are also a concern. And as interest rates rise because of the added borrowing, so too will interest payments. Lastly, there is also concern that government borrowing may “crowd-out” private sector borrowing. To the extent funds that can be borrowed are finite, and that is debatable, every dollar the government borrows is a dollar potentially not available for home mortgages or business expansion.

To conclude, in the short run, things look good. In the medium-term, the fear of inflation and the Fed’s ability to let the data speak and not preemptively raise rates unnecessarily will determine how long the current expansion lasts. In the long-run, the government will have less room to maneuver when the next recession hits, and interest payments will consume a growing percentage of the budget, making budget battles on Capitol Hill more contentious and the need to find more revenue increasingly pressing.