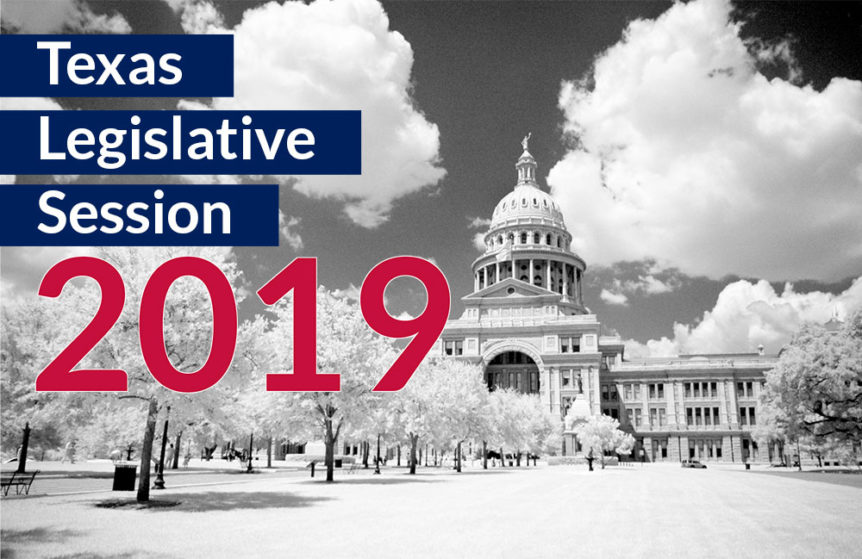 On January 8 at noon, members of the Texas Senate and House of Representatives gathered in their respective chambers at the Capitol to convene the 86th legislative session. That began the 140 day countdown to Sine Die (end of regular session) on May 27.

Members began filing bills on Nov. 18, 2018 and had until March 8 to file bills without restriction. There were 7,795 total bills and resolutions filed. Of those, only 1,525 (19.5%) passed to Governor Abbott’s desk, with 1,467 that have or are scheduled to become law. With constitutionally mandated legislative deadlines and inherent procedural roadblocks, the Texas legislative process is designed to kill bills rather than pass them and that is reflected in the numbers.

The only bill the legislature has to pass is a budget. This year that was House Bill 1. The budget for the state of Texas for the next two years totals approximately $250 billion, which is up 16% from the last budget that was approximately $217 billion.

This increase is largely due to the legislature having more money because of a positive economic forecast from Texas Comptroller Glenn Hegar and increased estimates from oil and gas production taxes.

Much of the extra money went to the top priorities of the state’s leadership, which included school finance reform, property tax reform and Hurricane Harvey relief funding. The “big three” of Governor Greg Abbott, Lt. Governor Dan Patrick and Speaker Dennis Bonnen were unified on these goals from the start of session to the finish.

The Texas Plan, the school finance package, was for $11.6 billion that included an additional $6.5 billion in new spending for schools, as well as $5.1 billion to lower Texans’ property tax bills. This includes a 20% increase in per-student funding as well as money for teacher pay raises.

Senate Bill 2 by Senator Paul Bettencourt (R-Houston) will provide property tax and appraisal process relief. SB 2 will require an automatic property tax roll-back election for cities, counties and certain other local governmental entities that increase their revenue by more than 3.5%. School districts will have a 2.5% threshold. Currently, voters can petition for a rollback if revenues exceed 8%.

The Flood Infrastructure Fund, which will be subject to the voters passing a constitutional amendment in November, will allow eligible political subdivisions the ability to apply for money to help construct future flood mitigation and protection projects.

The Texas Infrastructure Resiliency Fund will allow cities, counties and other political subdivisions to apply for grants and low- or zero-interest loans. These dollars will be for matching funds for federal recovery monies, Hurricane Harvey specific projects, floodplain management and flood plan implementation.

House Bill 2439 by Representative Dade Phelan (R- Beaumont) will prohibit cities from using building codes or other local ordinance powers to mandate the use of certain products in construction and result in the direct or indirect prohibition of other code approved products.

This legislation will help protect Texas’ free market values and prohibit local governments from requiring only certain types of building products or construction methods, which effectively bans the use of other generally approved products that meet or exceed industry standards and building code requirements.

Most importantly, as of September 1 this bill will void any currently adopted ordinances that violate the legislation’s provisions and those ordinances will be illegal.

House Bill 2856 – Vetoed by the Governor

House Bill 2439 by Representative Geanie Morrison (R- Victoria) would have helped crack down on disaster scam artists by criminalizing violations of the disaster remediation contracts statute in order to protect those residents hit by disasters.

The veto was unexpected and is still confusing, but the Governor appreciated the intent and has stated that he will work on this next session.

Governor Abbott said, “House Bill 2856 attempts to address the very real problem of disaster-remediation contractors who take advantage of disaster victims. But it does so with a stiff criminal penalty in an area where civil remedies already exist, which could discourage well-intentioned, quality tradespeople from seeking work in Texas following a disaster. This could inadvertently harm victims and impede recovery. We must take a more measured approach to this issue… I look forward to working with the author next session.”

The 86th Legislative Session was long, but at least there is no Special Session on the horizon. Our Rally Day in March was huge success. We had members travel to Austin multiple times to meet with legislators, testify before committees and advocate for our industry.

The GHBA Government Affairs team thanks everyone who contributed their time and effort during this session. Thank you! Without your support and focus on advocacy, our industry would not be the driver of the Texas economy that it is today.