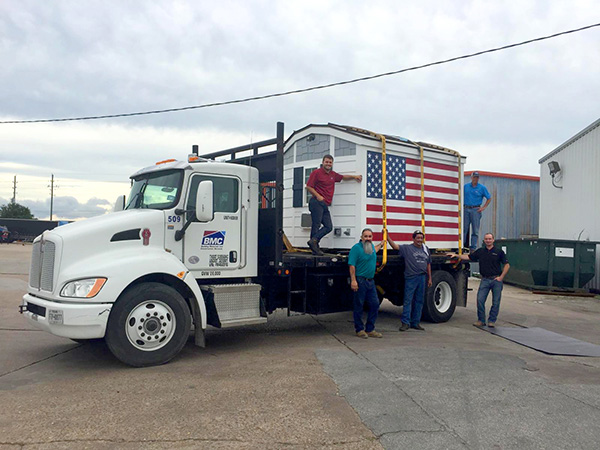 Special thanks to BMC for transporting the Playhouse to Minute Maid Park.

It’s a “star spangled” event when it comes to HomeAid Houston’s annual fundraiser, Project Playhouse. Taylor Morrison/Darling Homes partnered with BMC to deliver the 2017 playhouse to Minute Maid Park where it is on display through July 27 on the concourse level behind Section 150 during the Astros home games.

The design is ideal for any backyard and is a child’s dream come true.”Salty Thomason, HomeAid Houston President

The “All American Playhouse” was built by Taylor Morrison/Darling Homes in collaboration with industry supporters. HomeAid Houston is a 501c3 charity supported by the Greater Houston Builders Association.

“The All American Playhouse design is a tribute to America as it showcases the American flag and evokes a sense of Americana at its finest,” said Salty Thomason, president of HomeAid Houston. “This design is ideal for any backyard and is a child’s dream come true.”

HomeAid Houston is partnering with Taylor Morrison/Darling Homes, the Houston Astros and the Astros Foundation on this 11th annual fundraiser that raises funds to build transformational housing for Houston’s homeless men, women and children.

Transportation of the All American Playhouse was donated for the eighth year by BMC and led by Bryan Baker with team members Randy Salinas, Juan Lopez and Jackson Tollenson.

The playhouse includes a variety of amenities such as an LED television, an electronic game console, air conditioning and whimsical furnishings provided by professional interior designers that are perfect for both girls and boys.

Raffle tickets for an opportunity to win the All American Playhouse are $5 and are available online and during the Astros games from June 27 to July 19. The drawing for the winner will be held during the game on July 19. 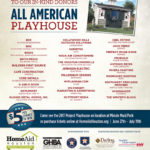 A huge thank you to all of the companies and individuals who made the 2017 All American Playhouse possible! 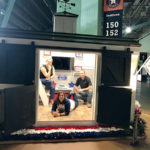 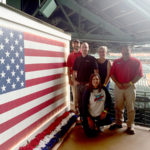 The team of Taylor Morrison/Darling Homes put the finishing touches on the Playhouse at Minute Maid Park. 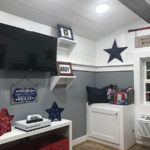 The interior includes a television and even air conditioning! 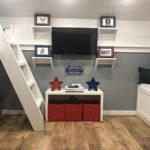 The Playhouse is a kid’s dream come true! 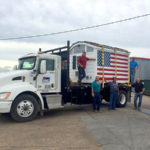 Special thanks to BMC for transporting the Playhouse to Minute Maid Park.