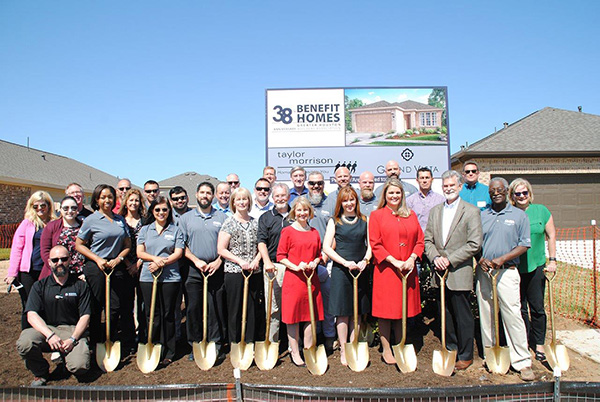 Key players in the 2018 Benefit Home gather for a groundbreaking in Taylor Morrison’s Grand Vista community in Richmond, Texas.

GHBA members gathered at the new community clubhouse in Grand Vista to help mark the official groundbreaking of the first GHBA Benefit Home for 2018. Taylor Morrison and several guest speakers led the ceremony. Taylor Morrison is building its Rosebay Plan in the community of Grand Vista.

Each year two to three homes are built for this GHBA charity fundraiser with donated land, construction management, materials, labor and services by association members. These homes are constructed with upgrade materials and features and are sold at market value.

Since the project began 38 years ago, more than $10 million has been raised.

“It was such an incredible event to mark the beginning of construction with the dozens of vendors and special guests who joined in the groundbreaking celebration,” said Cindy Hinson. “All Benefit Home groundbreakings are huge milestones for the charities and the entire Benefit Homes team of vendors, trades and the builder/developer teams. The energy and excitement of the occasion is an inspiration to everyone who attends,” Hinson added.

Located in the highly-desirable city of Richmond, Grand Vista is ideal for today’s homebuyers seeking all the advantages of contemporary suburban living just 30 miles from downtown Houston.

Grand Vista covers 620 acres including 150 acres of parks, open space, and recreational amenities such as two community clubhouses and pools plus playgrounds for the kids.