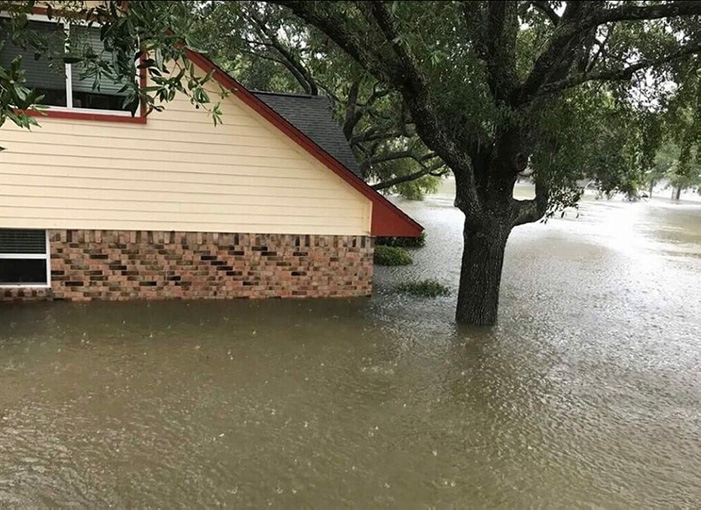 The destruction caused by Hurricane Harvey is beyond heartbreaking. The thought of losing your home in the storm is devastating. GHBA member Dave Yelovich of Tilson Homes and his family sought shelter at 2:30 a.m. with the clothes on their backs. They walked through chest-deep water in the street just to reach their cars so they could drive to a neighbor’s home a mile away on higher ground.

Dave wasn’t alone. His entire neighborhood of Wedgewood Village in Friendswood flooded. About 70% are rebuilding at this time, while the rest have abandoned their homes. Wedgewood Village backs up to Clear Creek which has overflowed its banks twice before. During Harvey, the creek went from its normal 30 foot width to two miles wide, encompassing three other creeks.

After just finishing a major renovation of his home and building envelope which brought his air change per hour (ACH) down from 26 to 5, he was back at the drawing board. Dave and his wife Mindy took a bold step and decided to rebuild. They loved the neighborhood, the woods leading out to the creek and most of all their community.

Dave teamed up with architects, designers and colleagues and decided it would be best to raise their home eight feet above his finished floors. His current slab wasn’t damaged, so they would build on that instead of paying to raise it or lay another foundation.

The city only requires 2.5 feet, but his home had taken on five feet of water. It was an out-of-the-box and expensive decision, but Dave felt in order to make this a safe home free from the threat of flooding that was what he had to do. He was going to build a home with a “Texas basement.” The new home plan with 8 ft. raised floors will be completed in April 2018 and receive a Bronze GBGC certification.

Dave also worked with an energy rater, Clayton Morris of DPIS Engineering. Together they came up with a home plan that would be certified by the Green Built Gulf Coast (GBGC) program.

Owning a home that has been scored and certified gives reassurance that you have purchased a well built home. Third party verification and inspections in addition to inspections by a municipality or International Residential Code (IRC) process assures accurately applied construction practices and building science techniques. This translates to a more sustainable home and increased energy efficiency. The bottom line is reduced maintenance and operations costs to you, the homeowner.

Dave’s home will be complete in April 2018 and we all wish him and his family many years of good health, happiness and NO water in their new home!

You can read and see more about Dave’s story, the building materials he is using, and how he approached building science issues at his blog at DaveYelovich.com/blog.