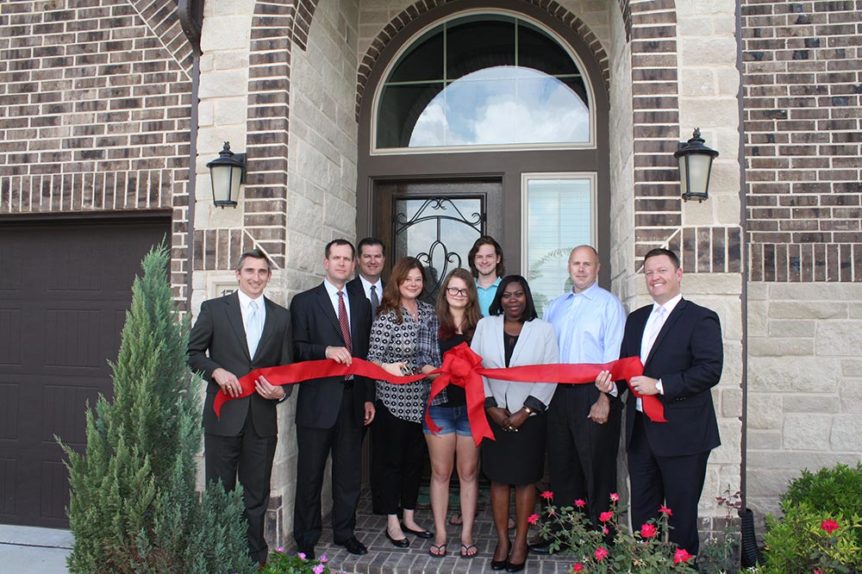 Perry Homes and the GHBA marked the sale of Perry’s 2015 Benefit Home at a formal ribbon cutting ceremony on September 17. The home was built with donated materials and services by GHBA members. The lot was donated by the Howard Hughes Corporation in the community of Bridgeland.

Guests included the buyers of the home, representatives from Perry Homes, Bridgeland, HomeAid Houston, and the GHBA. After the ceremony, guests gathered at the Perry Homes’ model for snacks and beverages and an opportunity to network.

Each year, two to three Benefit Homes are built with donated materials, labor and services from GHBA members. Since the project began 35 years ago, over $9 million has been raised. The beneficiaries are Texas Children’s Hospital, the Alzheimer’s Association and HomeAid Houston.

Perry and its team of professionals stepped up to be one of two builders for this year, and were quick to send
requests out to their extensive list of loyal vendors inviting them to participate in this fundraiser. As a result, today Perry Homes has completed and sold its 3199W E-70 plan, a 3,199 sq. ft., two-story that is loaded with upgrades and amenities. The home is located in Bridgeland’s Beech Creek section of Hidden Creek.

Perry’s 3199 Plan offers four bedrooms, 3.5 bathrooms and includes a three-car garage. The home also features a
dramatic circular staircase in the entry hall and a large wall of windows in the family room that capture natural light.

The formal dining room and library include polished hardwood floors. The kitchen becomes the heart of the home
with its built-in family seating and an angled island for added workspace as well as a spacious walk-in pantry.

The private master suite makes its own statement with a curved wall of windows and an elegant master bath with a garden tub, a separate glass-enclosed shower, dual sinks, a linen closet and two large walk-in closets. The secondary bedrooms, a Hollywood bathroom, a family-sized game room and an unfinished storage room complete the second floor.

“Perry and their construction and management teams were committed from day one to building a spectacular home that, when sold, would benefit so many,” said Peter Houghton, 2015 chairman of the Benefit Homes Project. “They selected a spectacular design that offers a tremendous line-up of features and amenities that were appealing to homebuyers with a multitude of demands. It was a special event to celebrate the closing of the home with an official ribbon-cutting.”

In attendance at the ceremony were: the homebuyers; and from Perry Homes, Austin Eaves, Chris Hightower, Daniel Neumann, Dean Miceli, Charlene Gates, Billy Shirley, Vincent Dela Cruz, Karla Waskiewicz, Lindsay Crenek and Jessica Lessy. From Bridgeland were Martha Gros and Peter Houghton. From HomeAid Houston was Bette Moser, and from the GHBA was Lisa Pepitone.

A second Benefit Home has just begun construction in the new 600 acre master planned community of Miramesa. Castletree Homes is donating construction management and Land Tejas Cos. donated the homesite.