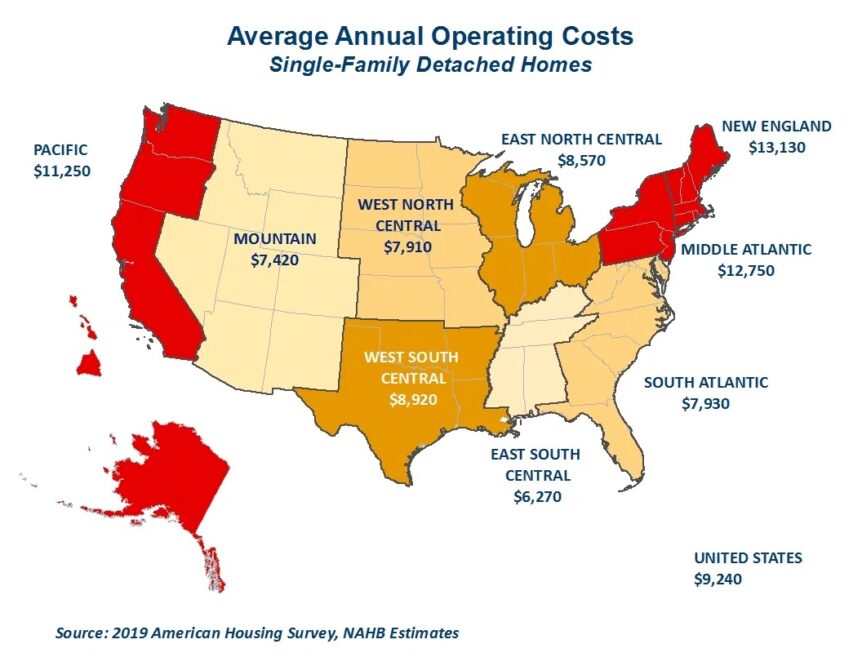 New NAHB research based on the latest 2019 American Housing Survey (AHS) shows that, on average, homeowners spend around $9,240 per year to operate and maintain a single-family detached home. This includes property taxes, insurance, maintenance and utilities, with property taxes being the costliest component.

Annual operating costs increase consistently with household income, home size and value. When measured as a share of home’s value, annual operating costs average close to 5%, but the rate is smaller for newer homes (3% of the home’s value for homes built after 2010). The regional differences in operating costs are substantial as well, ranging from around $6,270 per year in the East South Central Division to over $13,000 in New England. This effect is primarily connected to taxes.

Home insurance is the next most expensive item on the operating costs list. On average, homeowners pay just over $1,250 to cover home insurance. In addition, homeowners spend close to $1,000 on maintenance – narrowly defined in the AHS as spending on minor routine repairs that do not include improvements and major repairs. Water and trash collection bills amount to $850, on average.

The clearest trend is for operating and maintenance costs to decline per dollar of value as the age of the home declines. On average, annual costs of running a home amount close to 5% of the home’s value. This fraction exceeds 6% for homes built before 1960. As homes get newer, costs per dollar of value tend to decline. Home owners of single-family detached homes built after 2010 spend an equivalent of 3% of the home’s value per year on operating their newer homes.

As illustrated in the chart below, for every cost component, with the exception of property taxes, costs per dollar of value tend to decline as homes become newer. For example, fuels on average cost 2.2% of the home’s value per year for homes built before 1960 but only half of that, 1.1%, for homes built after 2010.

How much homeowners spend on operating and maintaining their homes also depends on where they live. Homeowners in the two Northeast divisions – New England and Mid Atlantic – spend most on running their single-family detached homes – over $13,130 and $12,750 per year, respectively.

Homeowners in the Pacific division, on average, face the most expensive homeowners’ insurance, as well as the highest water and trash bills. They also incur some of the highest property taxes and maintenance expenses in the nation. As a result, a typical homeowner in the Pacific division spends substantially more than the national average to operate and maintain a single-family detached home, with annual costs approaching $11,250.

At the other end of the spectrum is the East South Central division, known for low property taxes. The division also registers the lowest average maintenance, water and trash costs, and the second lowest homeowners’ insurance costs. As a result, home owners in the East South Central spend least to operate and maintain their single-family detached homes – $6,270 per year.

The complete NAHB report is available to the public as a courtesy of Housing Economics Online.