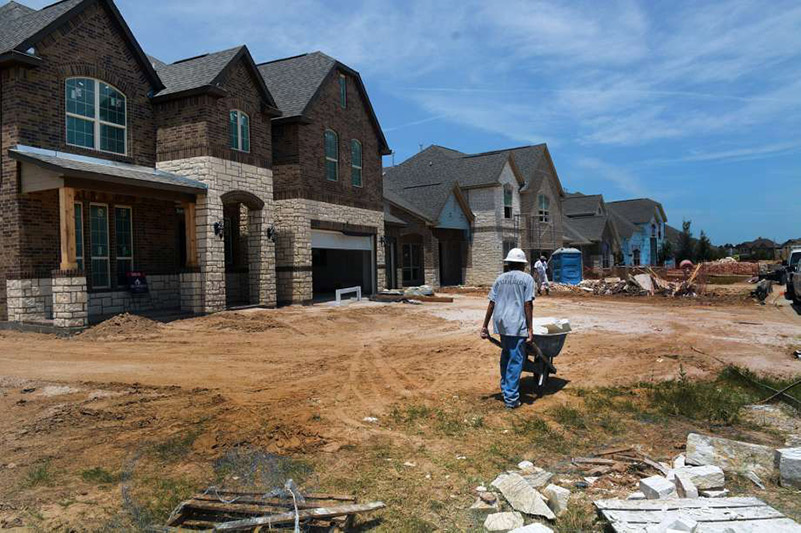 “Economists are a lot like weathermen,” Dotzour said in his opening remarks. “There is a 50% chance anything I tell you is either right or wrong. That’s what economists do, they predict the future using a crystal ball that is based on economic trends and academic training in economics, real estate, finance and history.”

Dotzour described Houston’s economic energy as “unbelievable,” pointing to the state’s consistent job and population growth as reasons for the positive outlook, with Texas having added 2.7 million jobs to the U.S. economy since 2000.

“As a very pro-business state,” he added, “we far outpace the rest of the country. I look for vitality of cities to help determine growth, where people are moving the most. The facts show the net domestic migration since 2000 has mostly gone to four metropolitan areas in the USA. They are Dallas/Ft Worth, Houston, San Antonio and Austin.”

Dotzour also addressed housing affordability. “It’s the number one economic challenge for further growth in this country, and the biggest problem in Texas. People are still moving to Texas because we have jobs and we have affordable housing relative to other parts of the country. Texas has affordable housing that does not exist in other major metropolitan areas.”

The two biggest factors for affordable housing are federal and local regulations. “Texas does a great job of tamping down local regulations,” he said, “but they still exist. It is getting harder and harder to get a moderately priced home on the ground.”

Houston Business Cycle index of leading indicators measures today’s activity. It shows Houston business is improving at a rapid clip. Even when oil dropped from $110 a barrel to $30, the HBC index never went down. According to Dotzour, this is because contrary to popular belief, Houston is more than just an oil economy. From 1980 to 2018, Houston fared better than most economies in the country, even with numerous spikes and drops in oil prices during that period. “Houston is bigger than the oil business. It’s not the only game in town,” he added.

Home sales have flattened out. Dotzour explained that housing starts are usually based on three factors: home price appreciation, job growth and mortgage affordability. Houston and Texas have all three.

Currently however, the housing supply is limited. “Houses aren’t being built as much because of the costs involved, and homebuyers have realized their home is the best investment they can make,” he said. “They aren’t flipping them they are keeping them.”

What makes home prices rise? Dotzour reports that the main price driver is supply. A six-month supply of houses is considered normal. Houston is at a 3.5 months’ supply. That is why prices are going up—more demand than supply. This is reflected in the number of building permits in Houston. Since 2012, Houston housing starts have been mostly flat. “We need to build more houses,” he said. “We need lower end, starter home type houses in this market.”

“This country is on fire from a business standpoint, I have never seen it like this,” Dotzour continued. “The country has been in a state of expansion since June 2009, and I don’t see that changing any time soon.”

Economic expansion is currently sitting at 108 months, the biggest ever was 120 months and it started following the Great Recession. “What happens when you have a tax cut at the top of a market? It continues its expansion,” Dotzour said.

The U.S. Leading Index of Economic Indicators is showing no sign of a tiring U.S. economy. Jobs are up, wages are up and business and consumer confidence is higher now than it was in 2006 before the crash.

Dr. Dotzour is not terribly concerned about the nation’s current, potential trade wars. He thinks Americans should pay a little more for goods and create more American jobs, though he is skeptical that will happen.

Dotzour shared that there are 6.3 million open jobs right now, up from 2.4 million just two years ago. “The U.S. needs legal immigration to fill many of these jobs, but the system must be fixed or our labor issues will get worse,” he explained. “3.9% unemployment is potential trouble for our labor issues. We need more workers.”

The first factor: oil prices. “If oil prices per barrel land above $100 and keep going up, this could cause an uptick in inflation,” he said. Oil is currently trading at around $66 a barrel.

The second factor: labor shortages. “With the unemployment level at 3.9 percent, the lowest it’s been since December 2000, there’s a risk wages could go up too fast if employers have to start increasing wages to maintain qualified workers,” Dotzour continued. “Raises in the two percent range would suffice, but something in the four to five percent range would be too fast.”

“Lastly, if the federal government pursues infrastructure projects that cost around the $1 trillion mark without a dedicated source of funds, that will add to the federal debt balance,” he added, “eventually causing inflation, which will then impact the housing market.”

Dr. Dotzour concluded his remarks by saying Houston is overall in great shape and the future looks bright. “Stay calm, talk to your clients, and keep building houses.”