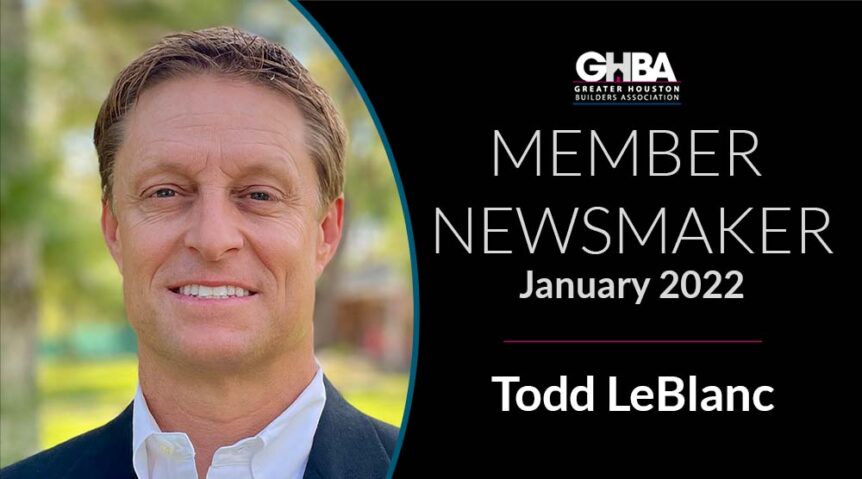 Todd LeBlanc, president of LeBlanc Custom Homes began his career in the homebuilding industry after many years of education and long hours as a software implementation consultant with extensive travel involved.

Todd graduated from LSU with a BS in Quantitative Business Analysis and earned an MBA from Baylor University.

His early career with Ernst & Young had him working at multi-national companies such as Enron, Shell, ExxonMobil, Pennzoil, Nissan and Air Liquide. Once he and his wife Meredith had their first child, he realized he needed a job that would not be 100% travel related.

In 2005, Todd started LeBlanc Custom Homes when he built his first house in Briargrove. The home sold immediately at completion, so he quit his consulting job and started building full-time. Unfortunately, the timing couldn’t have been worse as it was 2007 – 2008, a terrible financial crisis period. He did manage to stay the course and his company survived that time and started growing.

LeBlanc Custom Homes builds a mixture of speculative and custom homes in west Houston – primarily in the Memorial Villages and Spring Valley areas. In addition to managing the company, Todd supervises all of his projects, so he limits the number of concurrent projects to a few.

“Supervising my own projects helps me know what is going on during construction. That prevents mistakes from happening or catching mistakes early before it’s too late.”

When Todd started in own company, he was missing the professional relationships that had developed throughout his consulting career. He looked to the GHBA for opportunities to network and meet other builders and associates that he now considers friends. “The relationships I have developed with other builders through the GHBA has been invaluable,” Todd said.

Todd’s GHBA involvement includes a membership since 2006, serving on the Custom Builders Council (CBC) board for 10 years, and serving as 2021 CBC chairman. Todd was also awarded the 2018 GHBA Custom Builder of the Year award. He has been active in numerous association events including the CBC luncheons, BABA fishing tournaments, charity events, education classes, AIA Sandcastle Competition and BBQ cookoffs.

Todd and his wife Meredith have three boys, Andrew (Texas A&M), Alex (high school senior) and Grayson (high school freshman). He and his family have gotten used to moving quite frequently as they move into one of their new houses every few years.

While not building houses, Todd enjoys spending time at his bay house, boating and fishing in Galveston, and also enjoys working out and training Jiu Jitsu.