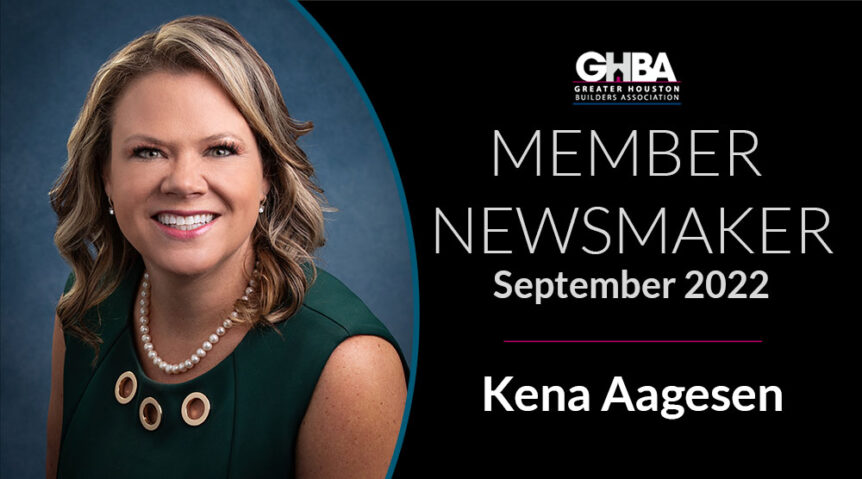 Kena Aagesen, a commercial insurance agent with Hotchkiss Insurance for 21 years, became involved with the GHBA through the Bay Area Builders Association (BABA) in 2004.

“GHBA and BABA have been an integral part of my success,” said Kena, “The fact that I live in the Clear Lake area gave me the roots I need to do the most good there.”

Several years later, Bay Area Support Your Troops was formed, which evolved eventually into Operation FINALLY Home (OFH). From there, after several years, Kena alternated between vice president and secretary of BABA since 2012. “These days I usually let someone else have the title and focus on the events that I chair. I asked to do a fishing tournament for four years before we were able to get it approved, and it is now one of the largest events we have at GHBA, and is definitely the largest event for BABA. This year will be our ninth annual tournament.”

In 2016, Kena started the Operation FINALLY Home Clay Shoot. “This is a true labor of love. Our BABA board helps run the event and 100% of the proceeds benefit OFH.“

Kena credits the GHBA relationships and opportunities gained through networking and education that have led to her growth, not only professionally but personally as well.

Kena has held numerous positions at the GHBA. She has served the Custom Builders Council, Membership Committee, and Leadership Development Committee. In addition, she has served on the TAB board, helping with the Sunbelt and Contracts committees, and is a member of Professional Women in Building Council. Kena’s list of achievements and roles include:

Kena’s involvement with GHBA and BABA recently led to a unique opportunity where she was asked to be a part of the Bay Area Alliance’s Dancing with the Stars Competition. The Alliance serves, supports, and inspires students and families to build a healthier community for all. They work in the Bay Area of Texas to help create a drug and alcohol-free environment for their youth. Activities include Medication Take Backs, Student Adult Leadership Service Alliance, Vaping Task Force, and two community coalitions serving both Clear Creek and Friendswood ISDs.

The competition involves six couples each choosing a dance to learn. Kena and her partner Mo Ghuneim will compete on September 10 at 6 p.m. at the Doyle Convention Center in Texas City.