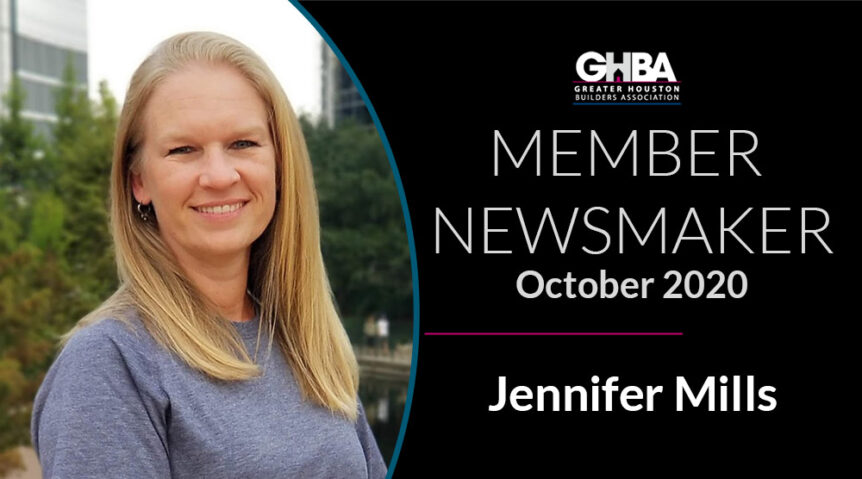 Jennifer Mills is a native Houstonian. After graduating from Texas A&M, she began her career in the Foley’s office in downtown Houston where she worked in the children’s and cosmetics buying offices. In 2006, she began her homebuilding industry career in national distribution at House of Forgings, Ironwood Connection’s parent company. About two years went by, and she decided to switch gears to outside sales where she is currently a senior account sales rep focusing on high volume builders for Ironwood Connection.

Jennifer is on the Associate Council board serving as vice president and has been actively involved in the GHBA for about six years. In addition to her leadership role, she also chairs the BBQ & Wild Game Cook-off Committee and serves on the Tex-Mex Cook-off Committee (formerly the Chili Cook-off).

“Being a member and actively involved in the GHBA has opened many doors professionally and personally. I truly love what I do and love to help people. The relationships that I have developed with other individuals involved in the GHBA will last a lifetime, and I cherish all of them.”

Jennifer will be celebrating her 20th wedding anniversary with her husband Steve this December. They have three active children: Donovan (19), Ashley (17) and Grant (15). Both boys play baseball year-round and Ashley plays volleyball, raises chickens and welds for FFA. Not only is Jennifer busy with work, she is also the vice president of Spring High School’s Baseball Booster Club and treasurer of the Volleyball Booster Club. There is never a dull moment. She and her family are avid cruisers, hopefully going on their 10th one to the Panama Canal in January. They love to hike and ride four-wheelers in the Big Bend area and have been going there since she was seven months pregnant with Donovan, sometimes, two or three times a year!