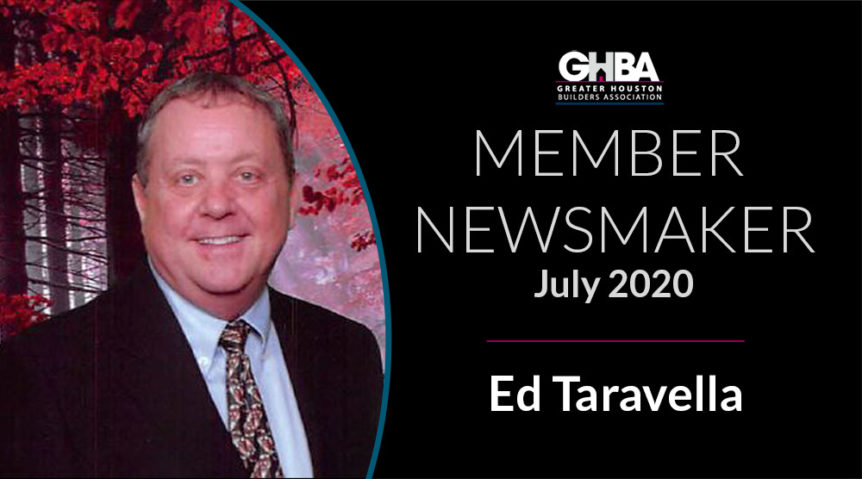 Edward Taravella is the president of  TARACORP, a commercial real estate investment, development and brokerage firm specializing in land and residential subdivisions. TARACORP was formed in 1995 and has been involved in the development of numerous single-family residential communities encompassing over 1,200 single-family lots.

TARACORP was named the Greater Houston Builders Association “Developer of the Year” in 2005 and 2015.

Ed has been an active member of the Greater Houston Builders Association (GHBA) since 1991, has served as the chairman of its Developers Council for the past 17 years and is a member of the board of directors. Prior to this, he was chairman of GHBA’s Government Affairs Committee and is currently a trustee of its political action committee, HOME-PAC. He was awarded the prestigious Presidential Citation for Outstanding Service in 2007, 2009 and 2019. He served as president of the GHBA-sponsored Builders CDC whose mission was developing affordable housing.

Ed is also a past president of the Houston Real Estate Council, an industry advocacy organization created to address public policies and regulatory issues affecting the real estate investment and development community in the Greater Houston area.

Ed was appointed by City Council to the Rebuild Houston Oversight Committee, responsible for overseeing the City of Houston Proposition 1 charter amendment involving the rebuilding of the City’s drainage and street infrastructure. He was also appointed by City Council to the board of Tax Increment Reinvestment Zone #1, responsible for the redevelopment of public infrastructure within the boundaries of the zone.

Through his involvement with these various volunteer organizations, Ed has served on numerous City of Houston and Harris County committees and task forces.

Ed has earned the professional designations of certified public accountant (CPA) and certified commercial investment member (CCIM). Ed received a Bachelor of Business Administration degree in Accounting from Wichita State University and has been a resident of Houston since 1981. In his spare time, if you don’t catch him on the tennis courts, you will find him enjoying an aged single malt scotch and a good cigar in his backyard retreat with his wife Joy.