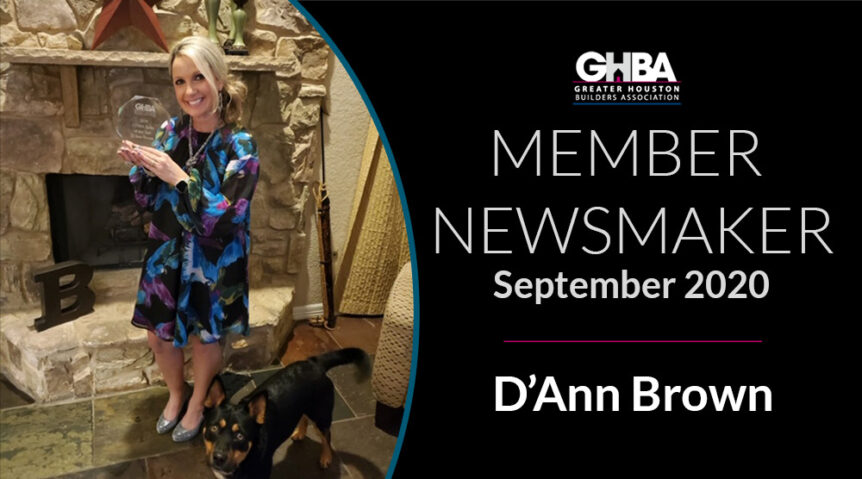 D’Ann Brown is vice president of sales in South Texas for StrucSure Home Warranty. D’Ann will celebrate her 19th year work anniversary next month as well as her 19th year as an active member of the GHBA.

In those 19 years, she has earned many awards, but one of the highest honors was receiving the 2015 Bud Inscho Associate of the Year Award, the premier distinction given to an associate member of the GHBA. She also earned the 2019 Spike of the Year, and has been awarded several presidential citations as well. At the state level, she was tapped with the 2017 Excellence Under 45 Award from the Texas Association of Builders (TAB).

D’Ann is actively involved in the association and has taken on leadership roles throughout the GHBA’s many councils and divisions. She was associate vice president of the GHBA in 2017. Currently, she serves on the boards of the GHBA, Montgomery County Builders and Developers Division, and the Bay Area Builders Association. She is also the GHBA Membership Committee chair and a member of the GHBA Executive Committee.

At TAB, she sits on the board of directors and acts as the associate vice president for Area III that helps communicate back to TAB what is going on in our industry from College Station to Beaumont and down to Houston. She is also a voting member on the TAB Membership Committee and the Sunbelt Builders Show Committee.

D’Ann was instrumental in creating one the association’s most successful and popular events – the annual BABA Fishing Tournament, now in its seventh year. She and her family also enjoy taking part in the Frank Aranza Adopt-a-Family charity event every Christmas! It is always a blessing to bring her kids along so that they may help other children during the holiday season.

D’Ann loves this industry and the people that make it up. “You will not find harder working and more fun people to be around, and it makes a day at the office feel like hanging out with a bunch of your closest friends,” she says.

She thought she would like to be attorney when she was young and then as she was finishing her business degree, she would dream of all the different career options that were out there. Never did she think she would end up in the industry she watched her parents work in all her life, but now there is no job she would rather have. She enjoys watching and being a part of the process of people being able to have a place to call home. The relationships she has made with her peers and clients are life-long and irreplaceable. D’Ann is definitely what you would consider a people person, with an ever-present smile on her face and can-do attitude.

When she is not working, she and her husband of 21 years, Nathan, enjoy fishing or anything outdoors with their dog Waylon Jennings. But these days it’s mostly traveling with her daughter Layla’s select softball team where Nathan is the D.O.D “dug out dad” and D’Ann is the scorekeeper. Their son, Blake, is in his third year of college and working full time. Would you believe he just got a job with a foundation company? The apples keep falling close to the tree!