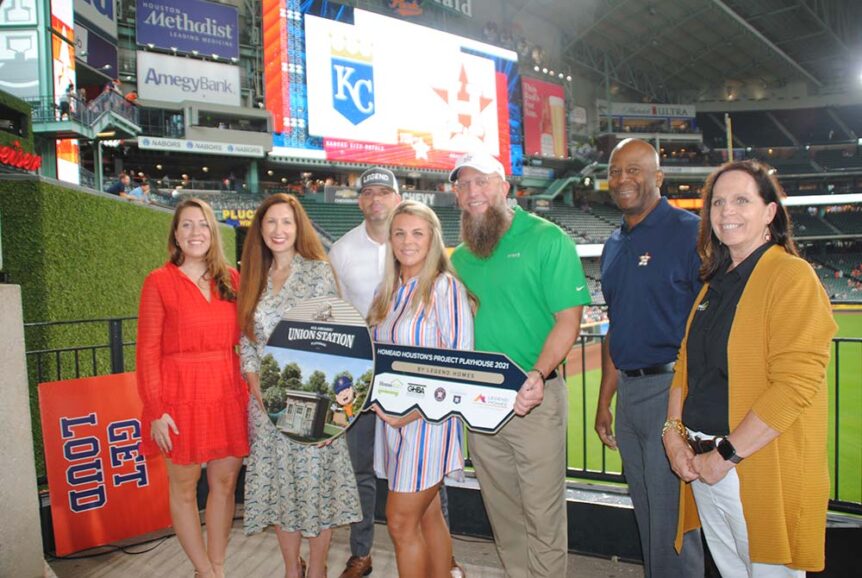 Team members from Legend Homes, the engineers and builders of the 2021 HomeAid Project Playhouse, were on hand to present the ceremonial key to the Union Station Playhouse winners on August 25 prior to the Astros vs the Kansas City Royals game.

“This is a proud moment for the entire HomeAid team, and that includes the Playhouse builder, who spent months designing and building it. The Jacob children will be taking advantage of all the perks the Union Station Playhouse offers.”

The Jacob family ultimately decided to accept Union Station Playhouse but also have committed as a family, to “play it forward,” meaning that although they will be accepting the playhouse, they are planning to pay the notion forward by donating it in the future to a non-profit agency that HomeAid currently has a working relationship with. One HomeAid agency for example, could be SEARCH’s House of Tiny Treasures, the first nationally accredited early childhood development center dedicated to serving homeless children and families.

This is the 15th year for HomeAid Project Playhouse, a partnership with the Houston Astros and the Astros Foundation that has raised over $1 million that goes toward HomeAid’s mission ‘to help people experiencing or at risk of homelessness, build new lives through construction, community engagement and education.’