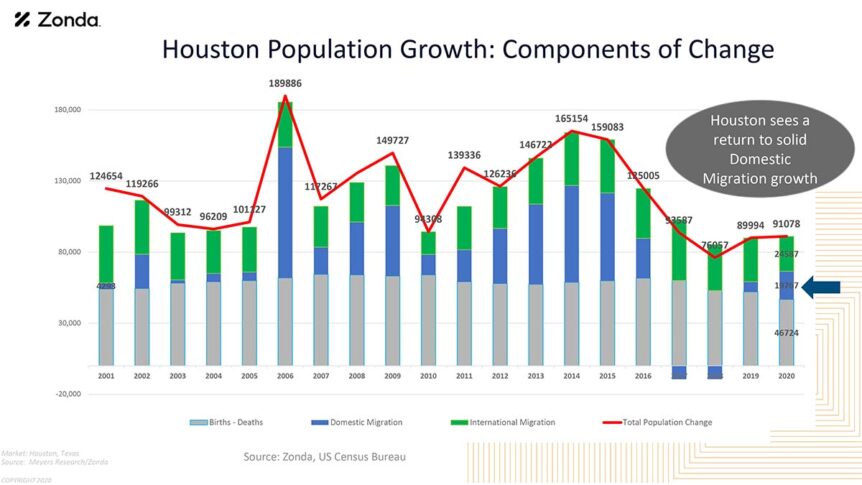 As the scorching hot Houston summer cedes to the, well, still pretty hot Houston fall, this region’s economics, demographics, and homebuilding industry remain strong. Over the long (insert your choice of synonym for hot) summer, several key data releases from Zonda and elsewhere painted a picture of just how robust conditions continue to be in spite of a few challenges.

During this period, only Dallas / Fort Worth and Phoenix saw greater population growth than Houston. (See figure 2)

More recently, the results of the 2020 decennial U.S. Census were released. The nine-county region that makes up the Houston MSA saw population growth of 1,201,451 people between 2010 and 2020. This brings the region’s population to nearly 7.2 million people and represents a 20% population growth rate between 2010 and 2020. Strong new home growth in suburban counties like Fort Bend, Montgomery, and Waller saw greater percentage growth than the Houston MSA as a whole. However, with a growth of nearly 640,000 new residents over the last decade, Harris County saw the greatest overall population growth. (See figure 3)

Dallas / Fort Worth also saw a 20% population growth rate during this decade, resulting in Houston and DFW being tied for the greatest percentage population growth among the 20 largest metro areas. The strong population growth of the last decade sets the stage for continued robust new home demand in the region. (See figure 4)

During this same time, the nation as a whole gained back 74.5% of jobs lost during the first two months of COVID. While Houston is seeing moderately strong job growth, this region’s rate of recovery is trailing the nation.

This is also reflected in the current Houston region unemployment rate of 6.8% versus 6.0% for Texas and 5.7% for the U.S. as a whole. Patrick Jankowski, the Senior Vice President of Research at the Greater Houston Partnership, recently reported an expectation that the Houston MSA should see a net year over year gain of 80,000 to 100,000 jobs by the end of 2021. A full recovery to pre-COVID employment levels is not likely expected until early 2023.

What Does This Mean for Homebuilding in Houston?

Homebuilders in the Houston area started nearly 43,000 homes in the 12 months ending at the conclusion of 2Q 2021. This represents a 32.6% increase in starts volume year over year. This is the largest number of annual home starts achieved in Houston since 2Q 2007. That is notable because just one quarter prior (1Q 2007) was when Houston reached its historic peak annual starts volume of just over 50,000. (See figure 5)

Unfortunately, lot supplies have not kept up with this pace. Just under 34,000 new lots were delivered (or reached substantial completion as a Community Developers Council member would say) in that same 12-month period. This imbalance has left the Houston market with the scarcest inventory of vacant developed lots (VDL) ever observed by Zonda or predecessor Metrostudy. Equilibrium inventory for VDL in Houston is 20 to 24 months. The current inventory level is a scant 10.5 months’ supply. However, that shrinks to single digit months’ supply figures for most lot sizes 80 feet wide and narrower—essentially all production builder relevant lot sizes. Zonda’s analysis indicates that new lot deliveries will continue to trail lot demand in Houston for the remainder of 2021 and into the first quarter or more of 2022. (See figure 6)

Where Does the Market Go From Here?

This article has so far made no mention of housing affordability, materials shortages, labor shortages, materials pricing, having to meter out monthly sales, and all of the other challenges that we are all currently facing in this industry, in Houston and elsewhere. Those issues are real, and we continue to experience a market in which demand is truly the only problem we don’t have.

Due to all of those coupled with Houston’s current and near future tight lot inventory conditions, Zonda currently anticipates calendar year 2021 ending with between 39,500 and 41,500 annual starts. This does represent a slight decline from the current trailing 12 months volume, due to every factor other than demand which remains strong. Houston’s long-term median and average annual new home starts volume hovers around 28,000. Typically, a year with 30,000 to 32,000 annual starts is a very good year in Houston’s new home industry. We should not lose sight of the fact that a 39,500 to 41,500 annual start year is a GREAT year in our new home industry.