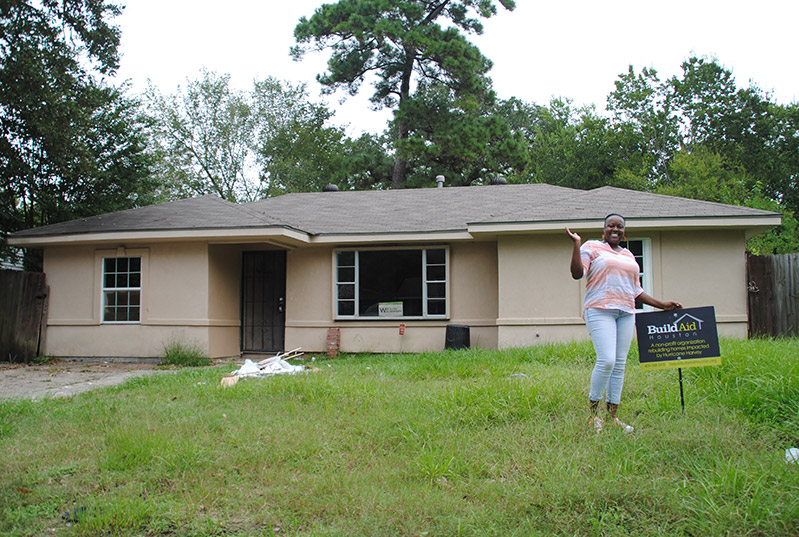 The Fight of All Time The night of August 26, 2018 was supposed to be remembered by many as the “Fight of all Time” when Floyd Mayweather took on Conor McGregor. But that night proved to be something bigger than two men battling it out for a multi-million dollar payday. August 26 was the night Hurricane Harvey upped the ante and dropped a record 51 inches of rain throughout the Houston area. Thousands, and perhaps hundreds of thousands of people watched that fight from homes, bars and restaurants all over town. Many of them became stranded due to rapidly rising water.

“My home is nearing completion and it is more beautiful than it ever was. I cannot thank the BuildAid people enough for giving me my life back. They have been professionals from day one and show they truly do care.”Crystal Wicks, BuildAid recipient

Crystal Wicks from Northeast Houston was one of those. She realized that this storm was different than any she’d ever experienced. “After 10 p.m. the rain picked up and the water began rising quickly toward my front door,” she said. “I began to panic so I dialed 911. No one answered.”

Once the water entered her home, Crystal marked a wall so she could monitor how fast it was rising. She saw it was two inches every 10 minutes. She knew it was time to leave.

Crystal Begins the Fight for Her Life

“I climbed on top of my Jeep Wrangler and just wanted to stay there because I was afraid of drowning. It was dark and the water was as high as five feet at that point.”

Crystal’s neighbors threw her a rope and she jumped in and began swimming and trying to run toward them, going under twice before she reached higher ground.

“There was a mass evacuation going on and in the chaos people were breaking and entering into the pawn shops, grocery stores and phone and shoe stores. We fought off piles of ant beds to reach the end of the street where it was higher. Debris kept crashing into me, cutting me and slowing me down and dragging me under.”

Once they made it to Mesa St., Crystal’s neighbor, Nolberto Blanco, the owner of a trucking company risked his life by using his 18-wheeler to pick up everyone and their pets that he could, and brought them to safety.

Crystal was transported to the George R. Brown Convention Center and her grandmother was able to provide a place to stay from there.
Crystal returned to her home four days later after the water had receded. The door was blocked by furniture, her refrigerator was on its back, the bed was blocking her bedroom door and wet clothes were everywhere. Six feet of water had destroyed everything.

FEMA worked with Crystal to provide funding for reconstruction. Her contractor did not have the skills to provide quality restoration and eventually took her FEMA funds and did not complete the job.

Crystal contacted Bayou City Relief and they connected her with BuildAid Houston.

“The BuildAid team contacted me shortly after I completed the application form, and the construction began after all of the paperwork was in order. They had to tear out almost everything the first contractor had done, as it was not handled correctly. My home is nearing completion and it is more beautiful than it ever was. I cannot thank the BuildAid people enough for giving me my life back. They have been professionals from day one and show they truly do care.”