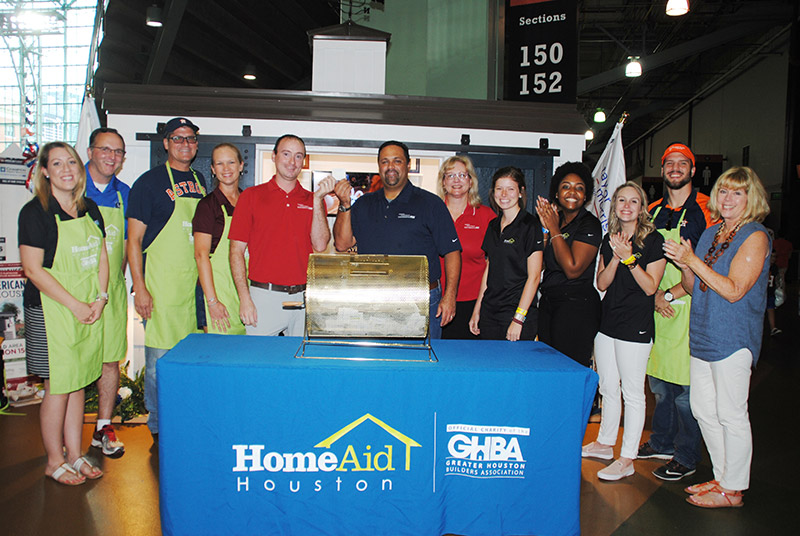 HomeAid Houston’s 2017 Project Playhouse was a World Series performance as the event raised a total of $106,625 for Houston’s mission “to build new lives for homeless families and individuals through housing and community outreach.”

HomeAid, a 501(c)3 charity of the Greater Houston Builders Association, builds transformational housing for Houston’s homeless. HomeAid, the Houston Astros and the Astros Foundation partnered with Taylor Morrison and Darling Homes (sister companies under the Taylor Morrison corporate umbrella), on this 11th annual fundraiser. Raffle tickets for a chance to win the playhouse in a drawing were sold for $5 each over a period of several months.

The winner is Lori Buckner, with Myrtle Cruz, Inc. Lori purchased her ticket from HomeAid’s own board member, Lisa Clark, one of 1,757 raffle tickets Lisa sold for Project Playhouse this year. Also kudos to the winning ticket sales team: Jennifer Wall, Cindy Hinson, Lisa Clark, Craig and Lisa Gentry for attending the Metrostudy event during the Astros game with 229 ticket sales totaling $1,145.

“I was so surprised and excited when I heard we had won the playhouse. My five-year old son Drew will be so happy to have such a special place where he can play. It is also remarkable to know that HomeAid Houston’s Project Playhouse is helping the homeless of Houston, and that is something else that makes winning this incredible playhouse so amazing.”Lori Buckner, 2017 Playhouse winner Taylor Morrison/Darling Homes designed and constructed this year’s playhouse, named “The All American Playhouse,” with donated materials and labor from GHBA members. Their team created a star spangled design that included the American flag incorporated onto its exterior, a front porch and Dutch style doors. The playhouse was fully loaded with amenities including air conditioning, a flat screen TV and gaming console, and child sized furniture and decor to match the theme.

“HomeAid was honored to partner with Taylor Morrison/Darling Homes on this year’s Project Playhouse. This team of professionals hit record numbers when they came on board. Their enthusiasm and commitment to the Project Playhouse was an inspiration to everyone who was privileged to work with their team. We cannot thank them and their vendors enough for making this such a successful year.”Salty Thomason, president of HomeAid