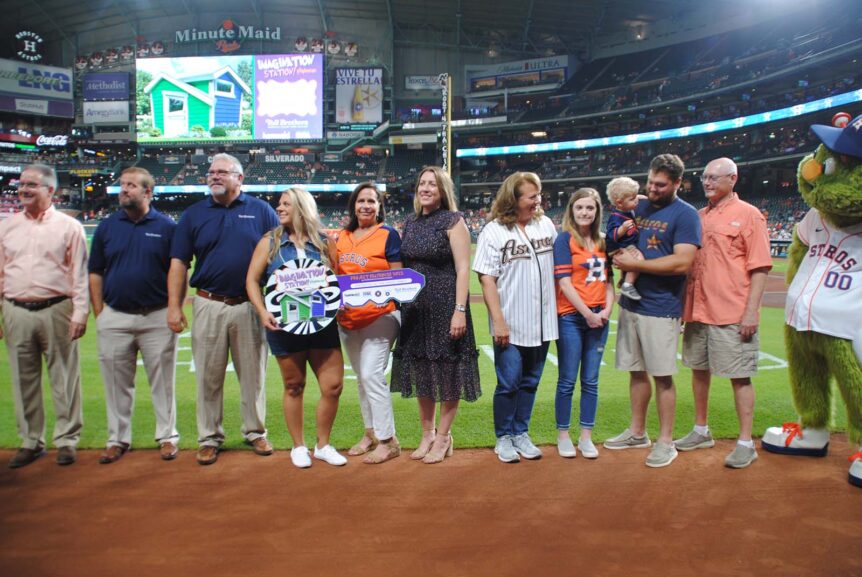 Official winners Gwen and Jeff Farley received the ceremonial key, along with their son Taylor Valigura, his wife Tori, and their baby Tucker, who will be receiving delivery of the playhouse in their backyard. Toll Brothers’ David Assid, division president; Brian Murray, division vice president; and Steve Woeppel, purchasing director joined the Farley family on the field along with HomeAid’s Nicole Jacob, board president; Carole Brady, executive director; and Kendall McDermott, development chair.

“We were so excited to hear from my mom that they had won the HomeAid Houston playhouse,” said Taylor Valigura. “We have two children under the age of two, so Imagination Station making its final destination in our backyard will bring a lot of joy and fun to our kids’ lives for a very long time.”

Children and adults alike are charmed by the playhouse’s whimsical design and fanciful amenities, that inspire creative play time that will help build childhood memories.

This 16th annual fundraiser that has raised over $1 million for future HomeAid construction projects, is a partnership with the Houston Astros and the Astros Foundation.

Imagination Station’s amenities include a thunderstorm-themed ceiling with LED color changing lights, a galaxy tunnel, a hidden door, a floating desk, a chalk wall, a lounge with reading space on the third level, a “hot air balloon” with budgie basket and pulley system, built-in bookshelves, a rubber gym floor, air conditioning and many others. It is a modular design to simplify its transportation and reconstruction in the winner’s backyard.

“Toll Brothers was honored and excited to take part in HomeAid Houston’s annual Project Playhouse fundraiser,” said David Assid. “Partnering with HomeAid in their efforts to help construct housing for homeless care providers, allows us to give back to our community and contribute to a cause that helps build a brighter future for those less fortunate. We were as excited as everyone else to learn who had won it. Congratulations to the Farley family!”