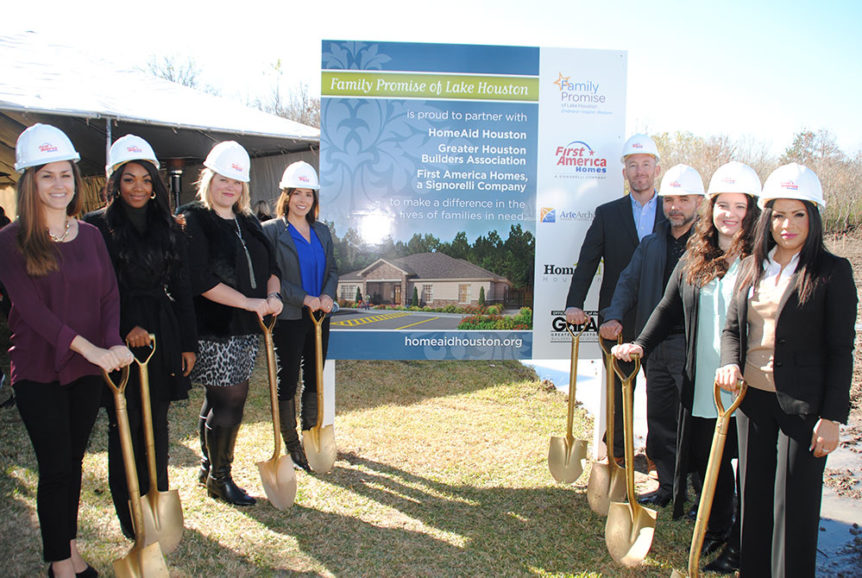 On December 11, an unused field in Humble was officially designated as the site for a 5,800 sq. ft. building that will help families in crisis rebuild their lives. HomeAid and First America Homes, the homebuilding division of The Signorelli Company, are partnering on construction of what is being called Promise House for Family Promise of Lake Houston (FPLH). Construction will be led by Builder Captain, First America Homes under the leadership of Dave Barnhart.

Family Promise of Lake Houston is an agency that meets the immediate needs of homeless families while empowering them to attain self-sufficiency. Promise House is their Life Skills Center that will offer a caring and positive environment for children and their families who are reeling from a variety of crisis situations including fire, flood, the death of a spouse, loss of a job, an eviction, or a foreclosure of a home. The Center will offer administration offices, additional mentoring and counseling offices, on-site training rooms, a teaching kitchen, a computer and educational room as well as a family room, library and children’s playroom.

Jessica Penney, executive director of FPLH, welcomed more than 100 guests who gathered to hear speakers’ inspirational and supportive comments that applauded the FPLH staff and board members, as well as the dozens of vendors and trades who are donating their materials and time for the construction. Speakers at the event included Rob Sorge, president of the FPLH board; Lauren Brinkerhoff, a FPLH mother who gave the invocation; Pam Webster, a FPLH graduate who is now a sheriff for the City of Houston; Carole Brady, executive director of HomeAid; Dave Barnhart, division president of First America Homes; and Casey Morgan, CEO of the Greater Houston Builders Association.

Also in attendance was Tom Depping, CEO at Ascentium Capital, a long-time supporter of the agency who presented a check to FPLH for $20,000.
A lunch reception concluded the event, generously provided by Sullivan’s Truck & Auto of Kingwood.

“Today’s groundbreaking ceremony marked a major milestone in the building and development of supportive housing for families who are facing homelessness,” said Carole Brady. “HomeAid is proud to partner with so many of the industry’s generous professionals who share the same passion for helping those less fortunate.”

Funders to the project include The William Stamps Farish Fund, Albemarle Foundation, Ascentium Capital and Avis Charitable Foundation. FPLH is also receiving funding from the PetSmart Charitable Foundation, which will pay for a “pet condo” on the property, allowing families to keep their pets as they work to improve their situation. The grant is part of a national agreement with the Family Promise organization.