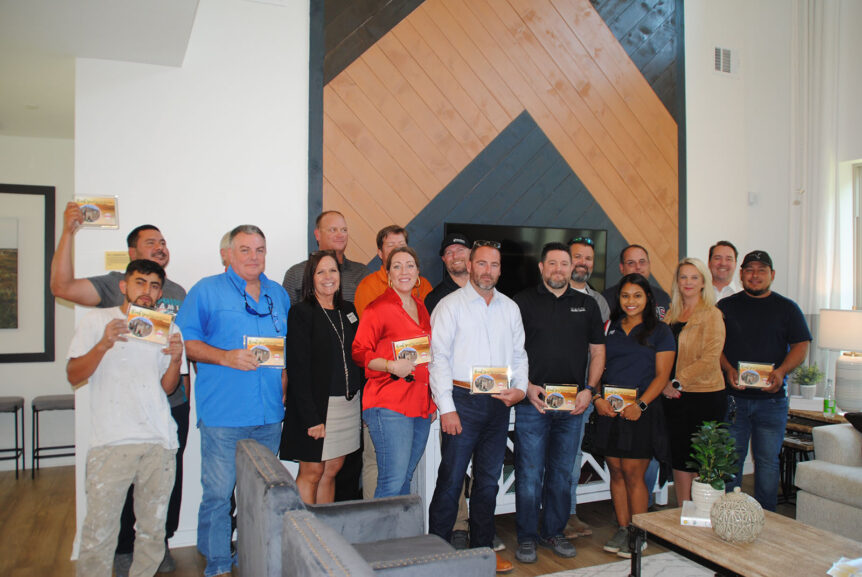 HistoryMaker Homes recently honored dozens of its loyal vendors and suppliers at a GHBA Benefit Homes Project Vendor Appreciation Luncheon held in the community of Sunterra. These companies were honored for donating materials, labor and services for the construction of the Hemlock Plan, that when sold, will benefit two local charities.

HistoryMaker’s Purchasing Department, led by Billy Staudt, director of construction, generated dozens of suppliers and trades to team with HistoryMaker to build this 2,777 sq. ft., two-story design that features three bedrooms and 2.5 baths. The home offers a media room and game room on the second floor, a downstairs owners suite with spacious walk-in closet, a dual vanity and a separate tub and shower. The floorplan is an open concept for easy entertaining and family gatherings, and the tall ceilings and box windows add to the spacious feeling. The home also includes a covered patio and large garage.

Representatives from many of these companies were on-hand to celebrate the completion of construction and to receive their award. HistoryMaker built the home on a homesite in Sunterra that was donated by Land Tejas Cos. Proceeds from the sale of the home will go to HomeAid Houston and Operation Finally Home.

Guests were treated to a barbecue buffet that was sponsored for the 16th year by Allpoints Surveying with Jeff Solomon and Kendall McDermott overseeing the lunch.

Representatives from the charities, the GHBA and the builder/developer teams showed their appreciation of the donations by saying a few words. Speakers were, Scott Merovitch, chairman of the Benefit Homes Project and city president with Chesmar Homes; Mickey Pizzitola, division president with HistoryMaker; Tim Johnson, director of community sales and marketing with Land Tejas; Jennifer Keller, president of the GHBA; Lee Kirgan with Operation Finally Home; Carole Brady, executive director of HomeAid Houston; and Billy Staudt, director of construction with HistoryMaker Homes.

“HistoryMaker Homes has enjoyed participating as builder captain for the GHBA Benefit Homes charity fundraiser this year,” said Mickey. “It’s such a tremendous opportunity to be able to provide funding to two outstanding organizations like HomeAid Houston and Operation Finally Home, through the construction and eventual sale of this new HistoryMaker home. We are extremely grateful to all of our vendors, suppliers, and trade base that generously gave financially toward this project.”

A second Benefit Home is being built by Taylor Morrison Homes in its community of Grand Vista.
Since the Project began more than $12 million has been raised. This is the second Benefit Home that HistoryMaker has built and the Sunterra homesite was the 19th donated lot by Land Tejas Cos.