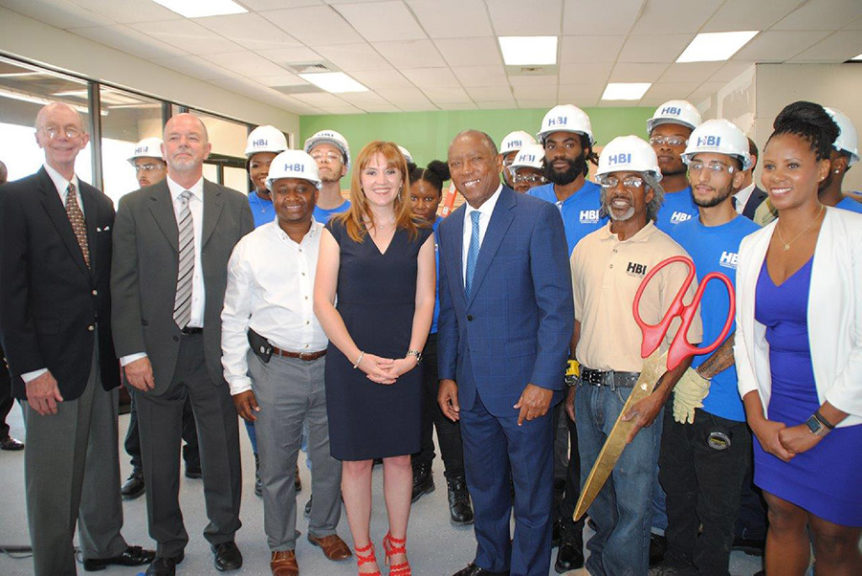 A ribbon-cutting marks the official launch of HBI Acres Homes

HBI is an affiliate of the National Association of Home Builders (NAHB) and facilitates trades-training classrooms across the country. As NAHB’s education arm, HBI is a national leader for career training in the building industry through their pre-apprenticeship programs, job placement services and certification curricula.

“The importance of trades-education has become crystalized for the GHBA since Hurricane Harvey. It made perfect sense for HBI to locate a Norbord-funded carpentry classroom in Houston.”Casey Morgan, GHBA CEO

HBI often partners with other stakeholders in the industry, and following hurricanes Harvey and Irma, was contacted by Norbord Inc., an international producer of wood-based panels and headquartered in Toronto Canada in order to help with recovery efforts in Texas and Florida. Specifically, Norbord reached out to HBI because they were interested in committing one million dollars to construction-related education in both states. In October of last year, HBI contacted the GHBA and shared that Norbord was interested in dedicating half of the funding, $500,000, in Texas.

GHBA CEO Casey Morgan immediately made a concerted effort to convince HBI and Norbord to partner with the City of Houston so that the funding could be directed locally in the aftermath of Hurricane Harvey.

“Our industry was already experiencing a labor shortage, but Hurricane Harvey exacerbated the shortage. Additionally, trades training has always been a priority for the GHBA, but the importance of trades-education has become crystalized for the GHBA since Harvey. It made perfect sense for HBI to locate a Norbord-funded carpentry classroom in Houston,” said Morgan. On a parallel track, Mayor Turner had recently announced an initiative called, Complete Communities. The initiative focuses economic revitalization and investment efforts in five different Houston neighborhoods. One component of these efforts is workforce development.

Thanks to the resources provided by the Complete Communities Initiative, including available warehouse space and a pipeline of prospective students, Norbord selected Houston to be recipient of their funding.

The process that followed was very much a collaboration. The City of Houston identified available classroom space in one of the Mayor’s Complete Communities, Acres Homes. The Texas Workforce Commission partnered with the City in order to enroll students, ages 18 to 24, in the classes. HBI facilitated the curriculum as well as hired two instructors. The GHBA, along with the Chesmar Foundation, provided funding for classroom materials. Most important, none of these efforts would have come to fruition without the generous contribution from Norbord. All parties involved demonstrated great teamwork!

Classes in the Acres Homes site began on June 18 with 14 students enrolled. The program includes two 12-week carpentry classes, and upon completion of the curriculum, students will be prepared for jobs in sheet rocking, framing, painting and roofing.

“The Chesmar Foundation was proud to financially support this program, but we are even more proud to support students learning the trades of our industry because it is incredibly important that we foster educational growth in the construction industry.”

Casey Morgan, CEO of the GHBA, speaks at the HBI ribbon-cutting press conference.

Moving forward, the GHBA hopes to continue its partnership with the City of Houston, HBI and Norbord so that more classrooms can be supported and facilitated across the City.