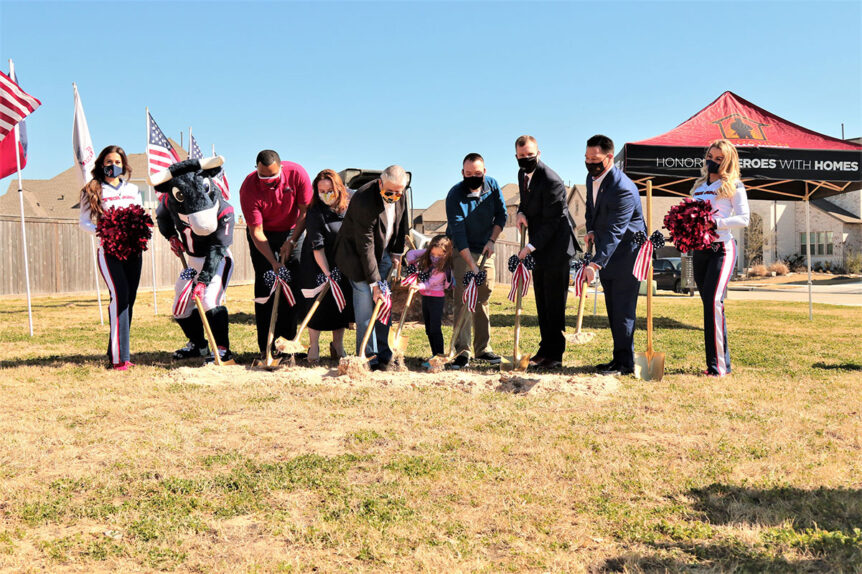 U.S. Army Staff Sergeant Stephen Netzley and his daughter recently joined their builder partners from Operation FINALLY HOME, Perry Homes, The Howard Hughes Corporation, Greater Houston Builders Association, and the Houston Texans for a groundbreaking ceremony on their new personalized, mortgage-free home at the homesite in the Bridgeland community.

The family was escorted to the homesite by the local Patriot Riders and were greeted by representatives from the Houston Texans cheerleaders, TORO, and Texans legend Chester Pitts.

“What a wonderful day to be able to break ground on this mortgage-free Perry home for Stephen and his daughter,” said Lee Kirgan, vice president/project management, Operation FINALLY HOME. “After a rough week in Houston with frigid weather conditions, this is a bright spot to gather and honor this American hero by providing him and his daughter a safe place to call home in the wonderful Bridgeland community.”

The handicap-accessible 2,251 sq. ft. home being built for the Netzley family will include open-concept living, three bedrooms, two bathrooms, a private home office, an extended covered backyard patio and a three-car garage. Some construction modifications will include an adapted primary bathroom shower, custom kitchen cabinetry, wider hallways and other safety features designed for Sgt. Netzley. The specialized Perry home is expected to be completed in May.

“We’re very proud to build this home that is perfectly suited for Sgt. Netzley’s family,” said Matthew Gerdes, Perry Homes Houston city president. “The three bedrooms allow for plenty of space for Stephen and his daughter, and this home also features the secluded office that was very important to him. The three-car garage provides Stephen with additional space for storage or hobbies, as well.”

Netzley and his daughter were surprised in November 2020 with the news they were receiving the new home. Additional celebratory events will be planned for the Netzley family in the coming months. The “Notes of Love” event will be held after the framing stage of the home is reached, allowing the builder, sponsors, and the local community to write personal messages to the family on the studs of the home. The “Dedication” event will be held after the new home is complete and ready for move-in.

U.S. Army Staff Sergeant Stephen Netzley was encouraged by his two older brothers to join the military in 2005 with hopes of a brighter future.

Money was always tight for Netzley growing up and he made a lot of personal sacrifices at an early age to help his family make ends meet, including dropping out of high school at 15 years old. Netzley had never owned his own bed before, so with the promise of guaranteed shelter and three meals a day, he enlisted in the U.S. Army as Cavalry Scout and began basic training at Fort Knox.

In May 2007, Netzley experienced what he calls “the most traumatic day” of his life. While overseas in Afghanistan on a mission to escort Afghan soldiers, Netzley’s unit was ambushed along the route. They lost approximately 18 Afghan soldiers, and several American soldiers were severely wounded. The convoy was immobilized, and their manpower was decimated.

The events of that day still haunt Netzley and the memory of preparing the bodies of the lost soldiers to be receive contributes to his post-traumatic stress disorder (PTSD).

By 2009, Netzley’s service-related injures included lower back pain that quickly escalated. As a result of operations involving dismounting mountains and being tossed around in trucks due to rough terrain and explosions, the discs in Netzley’s back progressively got worse, and he battled perpetual, radiating pain in both of his legs. Because of his physical limitations, Netzley was assigned to the Wounded Warrior unit where he helped advocate for other single soldiers. He took on an active role in the community and hosted numerous morale-building events for local veterans.
After being medically discharged from service, Netzley enrolled in a local community college. Faced with adversity, Netzley persevered and became actively involved in multiple school honors organizations and clubs, eventually volunteering to complete a thesis as an undergraduate student and graduating Magna Cum Laude from the University of Houston.

For his bravery and service in the U.S. Armed Forces, Netzley was awarded an Army’s Outstanding Volunteer Service Medal, Army Commendation Medal, Combat Action Badge and a Global War on Terrorism (GWOT) Service Medal, among other accolades.

Netzley and his daughter recently moved back to Texas to be closer to his family. Netzley is currently enrolled in college and plans to get a degree in social work and work with veterans.