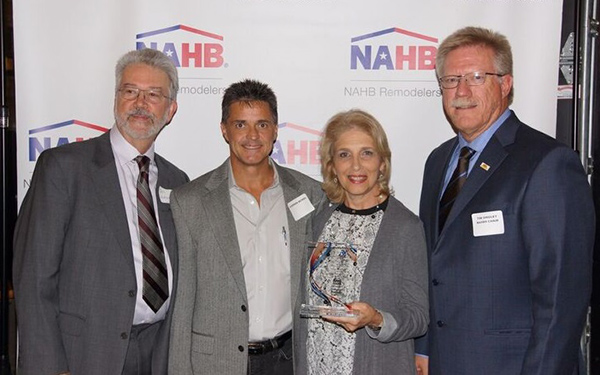 The Greater Houston Builders Association Remodelers Council (RMC) was honored with the NAHB’s 2016 Council Award for Demonstrating Remodeling Excellence for “Community Service.” The awards—known in the industry as the CADREs—were announced during NAHB Remodelers All Stars Party at the 2016 Remodelers Show in Baltimore earlier this month.

The CADRE Awards are judged by members of NAHB Remodelers’ board of trustees and are presented each year to local remodelers councils and individuals whose work at the local council level exemplifies the best practices of the remodeling industry.

The winning community service project was led by Sherry Pruitt, CGR, CAPS, with Whodid It Designs at Casa de Esperanza — Mary Scalise home. The RMC team made much-needed updates and improved the functionality, safety and beauty of this foster mother’s home. Mary is an employee of Casa de Esperanza who has adopted four Casa children. The youngest, Luke, has significant disabilities (cerebral palsy) and is wheelchair bound. The project added wheelchair accessibility to the home, as well as a much-needed first-floor bathroom with a roll-in shower. Additionally, the crew updated the kitchen with new cabinets, countertops and appliances and painted and replaced flooring on the first floor.

BMC was the lead sponsor and many additional companies donated to the project including Christian Fitsch-Mouras, CAPS with 101 Mobility who donated and installed a ceiling transfer lift that allows for the safe and easy transfer of Luke.

“The Houston RMC is a passionate and committed group of remodelers and businesses who love to give back to our community….This year’s project was so special as we were really able to change the lives of a mom, her son and their family by making their home more wheelchair accessible.”RMC President Stephen McNiel, CGR, CAPS, Creative Property Restoration

“The CADRE award is a huge recognition for the dedicated men and woman who generously give of themselves for our annual charity project,” said Stephen McNiel, CGR, CAPS, with Creative Property Restoration and president of the RMC.  “The Houston RMC is a passionate and committed group of remodelers and businesses who love to give back to our community. In the fall our charity garage sale held at the Texas Home & Garden Show at NRG Center, involves almost 100 volunteers  that donate thousands of hours to raise funds for the spring charity project. This year’s project was so special as we were really able to change the lives of a mom, her son and their family by making their home more wheelchair accessible.”