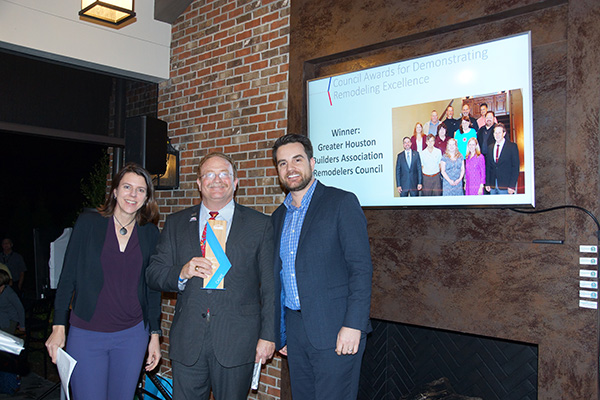 The Remodelers Council of the Greater Houston Builders Association (GHBA) was honored with a national award, the Council Award for Demonstrating Remodeling Excellence (CADREs), for outstanding membership recruitment and retention from the National Association of Home Builders (NAHB) Remodelers.

The awards were announced during NAHB Remodelers annual awards presentation at the 2018 International Builders’ Show in Orlando on Jan. 10.

The GHBA Remodelers Council made a distinctive effort in 2017 to grow membership. Designated members followed up with first time visitors, called lapsed members to remind them to renew their membership, let them know about upcoming educational opportunities and reached out to members who had not been recently involved to gather feedback on what could be more effective. Due to these efforts, the council increased its membership from 298 to 361 from January to October 2017.

Kevin Vick, 2017 council president and Houston-area remodeler, says, “The Remodelers Council has impacted lives in so many ways. I have witnessed the selflessness and professionalism of members who volunteer for charitable projects such as our Annual Charity Garage Sale in which the proceeds fund local charity projects at non-profit organizations.”

The CADRE is the NAHB Remodelers’ highest national award for work at the local level. The awards, judged by members of NAHB Remodelers’ leadership, are presented each year to local remodelers councils and individuals whose work at a local remodelers council exemplifies the best practices of the remodeling industry. Professional Remodeler magazine and Pella Windows and Doors serve as the official sponsor of the CADREs.

ABOUT NAHB REMODELERS: NAHB Remodelers is America’s home for professional remodelers, representing the more than 53,000 members of the National Association of Home Builders (NAHB) who are involved in the remodeling industry. Founded in 1982, the organization provides information, education and designation programs to improve the business and construction expertise of its members and to enhance the professional image of the industry. Its membership incorporates nearly 100 local councils in nearly every state. Learn more about remodeling at nahb.org/remodel.