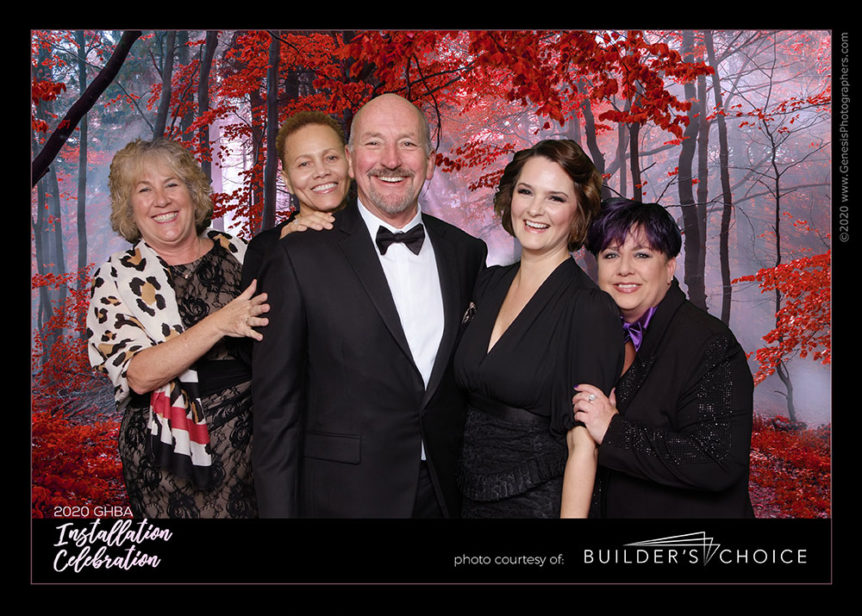 Every year GHBA honors six of its members for their outstanding work and service to the community and to the association throughout the year. These members were honored at the 2020 GHBA Installation Celebration event held on January 18 at The Briar Club where the theme was “Standing Strong – Tenacity Takes Root in Houston.”

A team of judges who are the last winners of each of these awards, along with the outgoing GHBA president (John Williams, K. Hovnanian Homes) and CEO Casey Morgan, convene to discuss the candidates and choose the next recipient for each of the awards.

The evening also featured the formal installation ceremony for incoming GHBA President Rob Hellyer, CGR, GMB, CAPS, with Premier Remodeling & Construction, and the new board of directors before a crowd of nearly 300.

Kena has served in many positions at the GHBA, some in leadership and many behind the scenes. She has served as associate vice president on the GHBA board, and has been on several additional boards including BABA and the Custom Builders Council, as well as a number of Texas Association of Builders (TAB) committees.

Kena is one of GHBA’s leading volunteers. For example, she stepped up to volunteer as an informative panelist on contracts and insurance topics and she is front and center meeting new  members.

2019 is the sixth year GHBA has recognized one of its many young professionals. This year, Jeremy Linzer joins those elite ranks.

Jeremy Linzer has been recognized this year for his professionalism and incredible visibility at the GHBA. He is never afraid to roll up his sleeves and get to work. Jeremy regularly volunteers for Associate Council events, including the cook-offs and golf tournaments, or attends builder events including speed selling and luncheons. His GHBA involvement stretches from League City to The Woodlands where he actively participates in both the BABA and Montgomery County divisions.

Developer of the Year
Peter Barnhart with Caldwell Companies

Peter Barnhart has long been the GHBA representative for Caldwell Companies, serving on the GHBA board as a HOME-PAC trustee and a Developers Council member. Peter has always been willing to lend his expertise to GHBA committees and taskforces; he has helped broker negotiations with local elected officials, and he has provided technical resources to the GHBA so that we might be able to craft better policy for the industry.

Jim Bob demonstrated the very best of GHBA custom builders through his dedication to the Custom Builders Council (CBC) and its community service projects. He has exemplified the qualities of a good leader and an attentive council chair.

During his tenure as CBC president, he was steadfast and focused, but willing to take on fresh ideas and change old practices in order to generate new interest in the council with different luncheon topics and events.

He also has a real passion for giving back and this was illustrated by his commitment to Casa de Esperanza, one of the CBC’s adopted HomeAid shelters where custom builders volunteered their time and resources for projects.

Remodeler of the Year
Sherry Pruitt with Whodid It Designs

Sherry Pruitt is the second woman to chair the Remodelers Council. She has set the bar very high with her enthusiasm, dedication to charity projects – the Remodelers Council completed three charity projects this year, not just two – her commitment to continuing education – she holds CGR and CAPS designations – volunteerism in the annual garage sale, and overall, exceptional leadership.

Chesmar has had a large presence at GHBA throughout the years. The entire company continues to support the GHBA, whether through attendance at events, contributions to HOME-PAC, industry mentorship with local students, fundraising additional scholarship dollars, or most notably, supporting GHBA’s charitable efforts through the Benefit Homes Project.

Chesmar Homes continues to be one of GHBA’s most reliable builders for this charity fundraiser. Not only have they built six homes, with the most recent last year, which contributed more than $84,000 to HomeAid Houston and Operation Finally Home, they take on a Benefit Home and receive support from their entire staff. It is a company-wide project and the amount of funds they alone have contributed demonstrates this commitment.

“Chesmarians” (their self-proclaimed team name) even host a welcoming reception for the owners purchasing the Benefit Home at their closing. Chesmar celebrates the owners and makes them feel as if they are a part of the Benefit Homes family, educating them on what the contribution meant to HomeAid Houston and Operation Finally Home.

GHBA is grateful for the longevity of support from the Chesmar leadership from both Don Klein and Scott Merovitch and the entire Chesmarian team.

Each year, the GHBA president may choose several members he would like to recognize for their outstanding service. These members go above and beyond and consistently support the GHBA and the president during his term.

Patrick Mayhan is a longtime GHBA leader, serving three terms as BABA president and as HomeAid president in 2019.

He has also been an active participant in the Benefit Homes Program. Under his leadership, he set the all-time record for the highest charitable contribution by a Benefit Home to HomeAid and Operation Finally Home with a contribution of $107,000 to each charity! On top of this, he signed on to do another benefit home with M/I Homes, which sold last fall and contributed over $87,000 to each charity.

“This lady continues to selflessly serve the GHBA year after year,” said Williams of this Presidential Citation honoree. “I wouldn’t be surprised if she attended the most GHBA events of any member last year; that’s how visible and active she is.”

Despite being relatively new to the organization, Kendall McDermott has jumped right in, dedicating time to multiple councils, the GHBA board, HomeAid and HOME-PAC. She was also a member of the 2019 Installation Committee and offers support for the president and the staff anytime she is called upon.

Ed Taravella has a real heart for service, leading the GHBA Developers Council in its advocacy efforts. This work can be labor intensive, and is critically important to our industry.

For many years Ed Taravella has been a GHBA leader, advocating for builders and developers behind the scenes without recognition and away from the spotlight. Thank you, Ed, for your continued commitment to GHBA’s government affairs efforts.

Mike has chaired GHBA’s Government Affairs Committee year after year. He has served on countless City of Houston stakeholder committees and taskforces. In addition, he has always been available to meet with elected officials at the local, state and national levels, all in an effort to effect positive change for our industry.

As a past president of the GHBA, he continues to go the extra mile for the association, and we appreciate his service very much. Thank you.