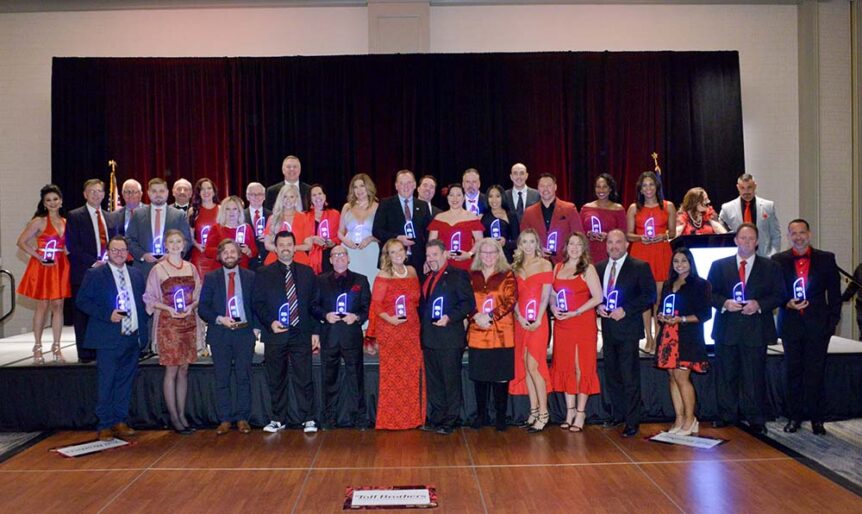 On January 15, the GHBA hosted its annual Installation Celebration that was themed “Inspiring the Future,” at the JW Marriott Hotel. Jennifer Keller, president and COO of Hamilton Thomas Homes, and the 2022 GHBA board of directors were officially installed during the ceremony before approximately 300 guests who attended this “red tie” event. Wearing red was encouraged as it symbolizes action, energy, determination, passion, luck, and prosperity.

Additional highlights included the annual “Of the Year” awards, and a celebration of the GHBA’s 81st anniversary. Pat Wilson with Legends Architectural Stone was the master of ceremonies.

OF THE YEAR WINNERS

Every year, the GHBA honors six members for their outstanding work and service to the community and to the association throughout the year. A team of judges who are the last five winners of each of these awards, along with the GHBA president and CEO, convene to discuss the candidates and choose the next recipient for each of the awards.

When the committee decided on Laurie as our award recipient, they shared that Laurie is involved with more events that anyone else they can think of at GHBA. She is consistently present, but not for her own gain, for the good of the organization.

Just a few of Laurie’s projects over the past year include the PRISM Awards where she successfully led the script writing for the event. At GHBA’s recent construction hiring event, Laurie jumped in and did everything from shepherding job seekers to potential employers to serving pizza. On behalf of the GHBA Scholarship Committee, Laurie helped raise funds for deserving students. This year that committee awarded eight, $4,000 scholarships—a record for the program.

Laurie ably served as a member of the Executive and Finance Committee, lending expertise and resources to help with the difficult decisions made by the committee during the year. Laurie is the epitome of what this award stands for.

The Young Professional of the Year Award goes to David Castle of Ironwood Connection.

When the award selection committee met, they agreed that David Castle demonstrates a level of service for others to aspire to. Not only is David young, but he is also present and active in almost every Associate Council event. Like Laurie, David participated in GHBA’s record-breaking 2021 scholarship committee to help raise funds for deserving students. He is also a hands-on supporter of the Adopt-A-Family program, donning a holiday sweater while he helps load and unload a truck full of presents for deserving clients of the Houston Housing Authority.

David attends classes, council meetings, committee meetings, cookoffs and more, and does so with a welcoming spirit. And we don’t expect that David’s activity will slow down anytime soon. In the coming year, David will serve on the Associate Council board and the GHBA board, among other volunteer commitments.

The Developer of the Year Award goes to Jim Jenkins of Toll Brothers.

Jim Jenkins is a long-time member and supporter of the GHBA. He is an experienced developer throughout most of the Houston region and beyond. Jim Jenkins does more than lead a company that provides amenities for his communities to grow and thrive together; he has a long- standing history of mentoring others. He truly helps to build not just communities, but people, too.

Jim is a member of GHBA’s political action committee, HOME PAC, because he sees the value of advocating for our industry with elected officials.

Toll Brothers is actively working to support GHBA’s charitable endeavors, too. This year, Toll Brothers is the force behind the popular HomeAid Houston Project Playhouse.

Jim conducts himself on a business, social and civic level that reflects respect on not only he and Toll Brothers, but on the GHBA as well.

The Custom Builder of the Year Award goes to Chris Bolio of Alair Custom Homes.

Chris Bolio connects with people. He connects with them on a professional level, recruiting new GHBA members through the power of his story of involvement in this organization. He introduces innovative new ideas for GHBA Custom Builders Council luncheons, like the new “Going Deeper” series that allows for deeper networking over lunch through engaging table discussions.

Chris connects with others while giving back to our community, through support of projects like the Custom Builders Council’s charitable work on the Krause Children’s Home. He connects with his clients, providing products that they desire and homes that win accolades at our PRISM Awards and the Texas Association of Builders’ Star Awards.

Chris goes above and beyond for our organization, serving as a TAB director and as the Custom Builders Council vice president in 2022.

The Remodeler of the Year Award goes to Jackson Gillette of Craftsmanship by John.

Jackson Gillette wholeheartedly supports the efforts of the Remodelers Council. He and his team at Craftsmanship by John have taken a leading role in several charity projects including work at Krause Children’s Home and Search’s House of Tiny Treasures.

Despite professional setback due to a lightning strike at the Craftsmanship by John facility, Jackson’s support for the council and his clients never wavered. Jackson has also taken the lead on reengaging past presidents of the Remodelers Council as an advisory group as he goes into his presidential year for the Council.

The Volume Builder of the Year Award goes to First America Homes, the homebuilding division of The Signorelli Company.

Led by Danny Signorelli, First America Homes has been a huge supporter of both the GHBA and HomeAid Houston, one of the association’s two official charitable partners. First America Homes stepped up to support a major HomeAid Houston project. First America Homes is building “Promise House,” a new life skills center for Family Promise of Lake Houston in Humble, Texas. The 5,800 square foot facility will offer mentoring and counseling offices, on-site training rooms, administrative space, a teaching kitchen, a computer room, a family room, a library, a children’s playroom, and even a pet condo.

In addition to supporting GHBA’s charitable endeavors, Danny is always willing to speak at council panel events. He leads in hands-on advocacy and political funding for elected officials who impact our region’s homebuilding climate. First America Homes also supports their team’s involvement in a variety of GHBA activities and committees, ranging from board service to government affairs.

Congratulations to all our Of the Year Award Winners. GHBA is truly grateful for your contributions, and we look forward to continuing to work with you.

Each year, the outgoing GHBA president also selects individuals who have shown a tremendous amount of loyalty and a commitment to the association through their interaction with other members, their willingness to share their industry experiences and this year, their positive outlook through some challenging times.

Lisa Clark, W Land Development – Lisa has actively served and been a vocal leader for the building industry at both the local level and the state level for a number of years.

“Back in 2009, Lisa was the first female president of the GHBA, and I know she is very proud that Houston now has its very own Professional Women in Building chapter,” said outgoing GHBA President Keith Luechtefeld.

Since serving as the GHBA’s president, she has continued to be an active leader, contributing her time and skills to the Developers Council, Government Affairs, and HOME-PAC and has served as a board member for HomeAid Houston, not to mention the countless citywide positions she has held.

John Williams, K. Hovnanian Homes – John has taken on a leadership role and dedicated significant time to improving residential code adoption in ways that help protect the homebuilding industry. He has done so by working with jurisdictions to help them understand that smart residential code changes benefit their communities, and onerous code changes not only have a negative impact on our industry but can have a negative impact on their communities as well. He has represented the GHBA as the residential code chairman for the Houston Construction Industry Council and has also worked extensively at the state level. He is a regular at GHBA events and is also a past president of the GHBA.

Ron Rohrbacher, Perry Homes – Ron was instrumental in the GHBA’s efforts to form a partnership with local workforce programs. Through his leadership and tenacity, the GHBA and numerous other workforce entities not only succeeded in hosting a successful construction career hiring event at WorkTexas, but they also laid the groundwork for GHBA to collaborate with school districts, community colleges, workforce organizations, and our own members.

“Thanks to Ron’s leadership in promoting our industry’s career opportunities and workforce collaborations at the local, state and national levels, the GHBA will continue to provide opportunities to identify, educate and employ the next generation of homebuilding industry professionals,” added Luechtefeld.

Greg Madrey, Builders Post-Tension – Greg has been an active member of the GHBA for the past two decades, serving in many positions, some in leadership and some behind the scenes. Within the GHBA there isn’t a council or division where Greg hasn’t been involved, including Bay Area Builders, Montgomery County Division, the Membership Committee, the Volume Builders Committee, the Custom Builders Council, the Associate Council and the GHBA Executive Committee. He is also active within the GHBA charities, HomeAid Houston and the Adopt-a-Family Project. Greg also served as the Associate Council president in 2019 and was awarded the 2018 C.S. Bud Inscho Associate of the Year Award.