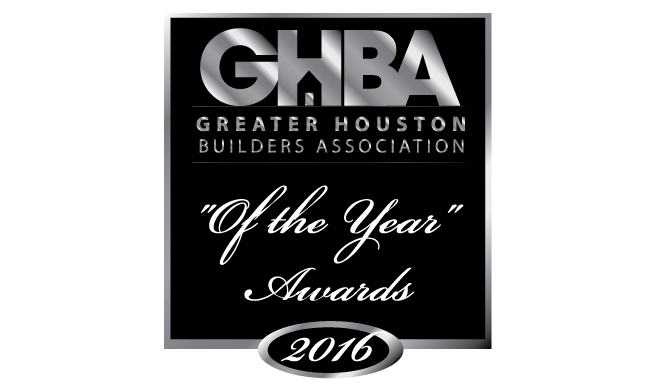 The GHBA recently announced the 2016 “Of the Year Awards” for the coveted Bud Inscho Associate, Young Professional, Developer, Custom Builder, Remodeler, and Builder of the Year at the GHBA’s 2017 Installation Celebration, “Tackling the Future,” a football themed event held at River Oaks Country Club on January 28, 2017.

The evening featured the formal installation ceremony for the incoming GHBA president, Bo Butler with Butler Brothers Construction and the new board of directors before a crowd of more than 300.

Toner Kersting with Snyder Energy Services and a GHBA presidential appointee, was the master of ceremonies.

The annual ‘Of the Year’ award winners are selected by industry peers. Winners are:

This award was presented to Debbie Page, an associate who supports a variety of councils and committees, including support of HomeAid Houston. Her contributions are usually behind-the-scenes and significant and she never demands accolades.

Adam Aschmann is active with the GHBA Young Professionals, has served on the TAB YP Committee and was recently installed as the NAHB Young Professionals Committee Chair for 2017. Despite his young age, he has been a leader on local, state and federal government affairs issues and continuously supports the GHBA at all levels.

Mark Kilkenny has been heavily involved with the Developers Council, Government Affairs Committee, and HOME-PAC for a number of years. He has served on many GHBA task force groups, as well as local commissions. This past year, when the EPA proposed its devastating Waters of the US rule, this developer led the call to challenge the agency for its over-reaching and onerous actions by creating a local stakeholder group, TARGET. GHBA is a proud member of TARGET and followed this developer’s direction as other stakeholders joined together to fight the EPA. Our association is indebted to this developer’s leadership and service.

Matt Sneller has been actively involved with the Custom Builders Council since 2014, serving on the board as well as builder captain of CBC charity projects. Under his charity project leadership, the CBC has been named Outstanding Group Volunteer by Casa de Esperanza. In addition to attending all CBC events, this builder supports the GHBA by attending major association events and represents the GHBA at TAB and NAHB builder shows. He has established a reputation of providing quality products to customers as well as serving as a dedicated representative of the GHBA.

A member since 2009, Stephen has been active in the Remodelers Council, served on the Government Affairs Committee and on the GHBA board. Under his leadership, the Remodelers Council raised $17,000 at its annual garage sale to dedicate to the 2017 charity project, saw record attendance at meetings, and won an NAHB Council Award for Demonstrating Remodeling Excellence (CADRE) for the 2016 charity project.

Builder of the Year – Lennar/Village Builders

Lennar/Village Builders has long been a fixture at the GHBA. The leadership team has been involved in the Volume Builders Committee, the Government Affairs Committee and HomeAid. In fact, a member of the company’s leadership team dedicated her time this past year generously serving as HomeAid president. This year, Lennar/Village Builders has committed to serve as a builder captain for a large HomeAid project at Boys & Girls Country, a home for at-risk youth in Hockley. Not only does this builder set the industry standard for charitable giving, but also for association involvement and industry-wide respect among peers and consumers.

Six members of the Executive Committee were selected for going above and beyond and consistently supporting the GHBA. They are:

John Madsen – Bentley Bratcher & Associates
John has served numerous years on the board. This GHBA treasurer is extremely dedicated and humbly applies his years of institutional knowledge to this position, which has served the association well.

Kena Looker-Armstrong – Hotchkiss Insurance
Kena is often seen as the hardest worker at any event, and in particular, BABA events. She consistently brings new ideas to the table and sees big projects to fruition for the betterment of the association.

Lisa Clark – Ryko Development
Lisa has served as a leader of the GHBA for many years, even after she became the first woman president of the GHBA. Lisa devotes time and expertise to the Developers Council, Government Affairs Committee and HOME-PAC, not to mention the countless city-wide positions she holds, all while graciously representing the developer community.