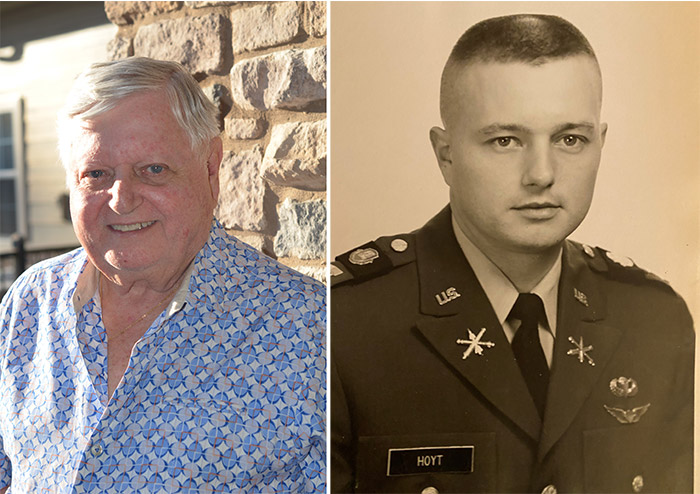 On the morning of January 29, 2021, at his home in The Woodlands, Texas, Max passed peacefully into the arms of our Lord. He joins his beloved Donna, his wife of 58 years, and their daughter Jessica Lynn Hoyt. He was a member of Saints Simon and Jude Catholic Parish.

Max was born October 16, 1938 to Maurice and Viola Hoyt in Wheaton, Missouri. He graduated from Crozier Tech High School in Dallas, Texas shortly after becoming an Eagle Scout. He accomplished an Expert Rifleman rating at the age of 15, then started his military training in his ROTC unit in high school. During his career in the U.S. Army, he earned his Bachelor’s in Political Science from the University of Nebraska and his Master’s in Education from Pepperdine University.

Max was a true patriot. He joined the United States Army in 1957 and became one of the youngest commissioned officers of the time before he was 20 years old. He became a pilot and served 20 years that included two tours in Vietnam where he saved countless lives through his actions. He was awarded 28 Air Medals and two Bronze Stars for his wartime service as a test pilot. Max also served in the Pacific Command in Hawaii for several years helping our and other nations’ POWs come home. His final posting was as congressional liaison for the Secretary of Defense. Throughout his military career he was respected both by his peers and commanders for his dedication, innovation, and professionalism. He retired as a Lieutenant Colonel whose service was exemplary and in the highest tradition of the military profession.

After leaving the military, Max worked as director of government relations for Mitchell Development of the Southwest where he helped navigate the Washington bureaucracy to aid in the development of The Woodlands, one of the country’s first master planned communities.

Max joined the GHBA team in 1984 as the director of government affairs and then served as its chief executive officer for nearly 20 years. Max was a staunch believer and supporter of professional education and aimed to raise the level of professionalism within the executive officers that represented Texas. He co-founded and organized the Executive Officers Council that served to share and improve all the Texas home builder associations. He also earned his Certified Association Executive (CAE) credentials and encouraged other HBA executives to do the same.

Max was well respected among his peers in Texas and across the country. He was an innovator who worked to diligently raise the level of professionalism not only for his peers but for the members of the association. Max was always pursuing programs and education for the benefit of the members. Under his leadership, GHBA grew in numbers and reputation. He loved the industry and was fully committed. His goal of leaving GHBA securely and financially sound was realized. He also proudly helped found HomeAid Houston in 2003, a charitable arm of the association.

Max wanted to have a permanent and professional home for the association and brought together the members to build the GHBA office that stands today. He made sure it had a kitchen where he would frequently make a Friday lunch for the staff!

In the third iteration of his career, Max became a business owner and discovered his true entrepreneurial spirit. He used his passion for the building industry to carve an essential niche into the residential construction warranty industry with ACES Builders Warranty. His guiding principle for the company is “Fairness & Integrity Above All,” a tenet which he also lived by. Max was always generating new ideas and pushing the bar to develop his employees and grow the business. He was a beloved mentor, leader, partner, and friend to all that he encountered in his 26 years with ACES. He made sure ACES supported others as well by giving yearly to the Neurological Research Institute at Texas Children’s Hospital, Operation Finally Home for our military services and the NICU at the Memorial Hermann Foundation.

One of the great joys throughout his life was traveling the world with his wife, Donna, and frequently their children, grandchildren, great grandchildren, and treasured friends. France was always a favorite! They especially enjoyed traveling with a group of friends known as the “Limoncellos” to many international destinations. Max enjoyed many trips with GHBA members. Maui was also a treasured destination of Max and Donna’s from the time he served in the Army to when the two soulmates renewed their vows at a small Catholic church in Lahaina in 2008 and beyond. They traveled to Hawaii many times accomplishing their longtime goal of taking all the family with them including every daughter, grandchild and several great grandchildren. Max recently celebrated his 80th birthday in Maui with his dear family and friends.

The family especially thanks the wonderful caregivers Laura, Veronica and Marian who helped Jennifer care for Max over the past year.