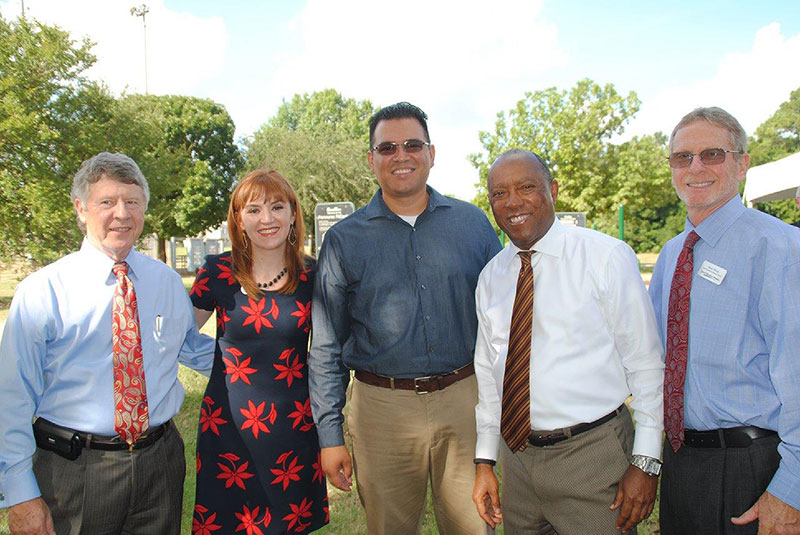 Also in attendance at the press conference was BuildAid recipient, Oliver Lee, whose home was flooded during Hurricane Harvey, but was later repaired and remodeled by David Weekley Homes through BuildAid.

I thank God for the people from BuildAid and David Weekley who began a program that actually helped us.Oliver Lee

BuildAid, an initiative of HomeAid Houston and the Greater Houston Builders Association, was started during the early aftermath of Hurricane Harvey by the David Weekley Foundation. BuildAid provides full home repair services to homeowners across the Houston area who experienced flooding due to Hurricane Harvey. Homeowners who have met the pre-qualification requirements will be matched with experienced builder members of the GHBA who will walk them through a finish selection process.

Oliver Lee recounted his experience with Hurricane Harvey and with BuildAid at the press conference.

“When the water began to come into our home on that day, we didn’t know what to do,” said Lee. “After the shock and awe, we knew that we had to get to work. One thing that we understood about Texas is Texans know how to do is get to work. So we began to call our friends, our neighbors. We were visited by volunteers from churches and different organizations. We began to get to work. We began to gut out our house and take out everything affected by the waters.”

“A few months passed and after everything we could do was done we began our building process again. It took a lot of time, a lot of effort. It took a lot of confusion with a lot of phone calls. We were even victims, like many others, who went through contractor fraud. But I thank God for the people from BuildAid and David Weekley who began a program that actually helped us. We’re the very first recipients of that program. It helped us get back into our homes expediently, helped us get back into our homes in a very professional manner,” Lee concluded.

During the press conference, elected officials joined together in bipartisan fashion to promote the importance of the $2.5 billion bond package, which will be directed toward flood protection and buyouts. With the $2.5 billion in bond funds, Harris County’s goal is to leverage federal funds to create $10 billion in resiliency projects.

The GHBA has been a stakeholder member in the Houston Stronger coalition since earlier this year, which has advocated for greater flood mitigation funding and infrastructure. The association urges all members to take the time to vote on August 25, or now through August 21 during early voting. www.HarrisVotes.com

This vote will have a significant impact on the future resiliency of our communities and the growth of our industry. Every vote matters!