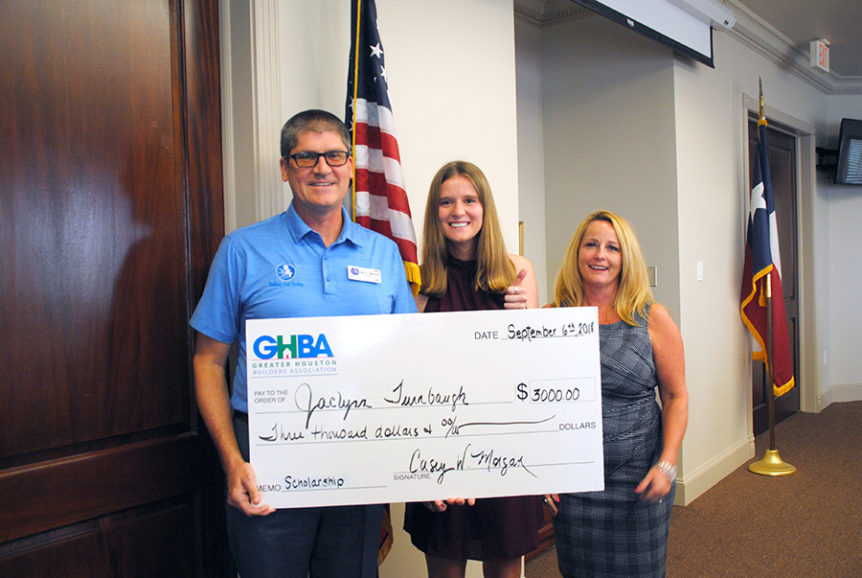 Each year, the GHBA Associate Council awards scholarships to students whose parents are members of the association. These scholarships are made possible through the generous donations of our members. Thank you to all our donors who make these awards possible!

This year, four deserving winners were presented with scholarship checks in the amount of $3,000 each. An official ceremony was held at the September 2018 GHBA board meeting.

The Associate Council would like to extend a special thank you to our outstanding donors. Contributors who donate $3,000 or more to the GHBA Scholarship Fund are recognized by having a scholarship awarded in their name. This year, two companies stepped up as presenting donors: Heritage Construction, and the Bill Ulrich Foundation provided by Newmark Homes.

Congratulations to the following scholarship recipients. GHBA wishes you all the best in your college careers and beyond!

Emily Smith is the 2018 recipient of the “Bill Ulrich Memorial Scholarship” which was provided by the generous donations from the employees of Newmark Homes, and presented in his honor. Emily is a junior at Baylor University and is the daughter of GHBA member Felicia Smith, office manager for Burgess Construction Consultants.

While Emily is majoring in accounting with a 4.0 GPA, after graduating in 2020 she is plans to plant a church in the Northeast region of the United States. She is a member of Alpha Lambda Delta and was inducted into Beta Gamma Sigma, an honor society for the top 10% of business students across the nation. She volunteers with the STARS mentorship program weekly working with third graders and also works 22 hours a week at her part-time job. She feels that while attending Baylor she has grown both academically and spiritually and is learning how to make a difference in the world through authentic leadership and faith in God.

Jaclynn is a junior at Texas A&M in College Station majoring in Ocean Engineering. She is interested in coastal shoreline restoration and coastal structures and is doing research for the Ocean Engineering Department in coastal sediment processes, beach nourishment, coastal engineering processes, wave breaking and renewable ocean energy. Jaclynn is a member of the Traditions Council, Freshman Leadership, Lambda Kappa Alpha Honor Society and the Society of Women Engineers. She is also the recipient of the Girl Scout Gold Star Award, which is only awarded to just 9% of U.S. Girl Scouts. Brooke Evans is the daughter of GHBA member Patty Evans, director of sales for GreenEco Builders. Brooke recently graduated from James E. Taylor High School in Katy, Texas and will be attending Baylor University in the fall.

While in high school, Brooke was a member of the National Honor Society, and the senior class president of the National Charity League, participated in Young Life all four years, was varsity and junior varsity cheer captain, was in the Spanish Club, on the varsity track team and volunteered with Best Buddies. Brooke was twice awarded the Presidential Service Award and received the Athletic Scholar Award four times and was a UCA All American cheerleader last year. She also has done over 500 hours in community service, and mission work in Nicaragua, Chicago, Colorado and in Houston. In Nicaragua she worked with the House of Hope whose mission is to provide asylum to victims of sex trafficking. After college she hopes to start her own organization one day to further help in this area. Kaven Xiong recently graduated from Waller High School and will be attending the University of Texas at Dallas in the fall where he plans to major in Computer Science. Kaven is the son of Steve Xiong, a housing program analyst at the Harris County Community Services Department. Kavin graduated fourth in his class and maintained straight A’s all four years of high school. He was senior president of Student Council and vice president of the Waller Chapter of the National Honor Society and was recognized as a Commended National Merit Scholar and a Texas Boys State representative. He placed second overall in Computer Science at District in the University Interscholastic League. Kavin also served as the Drum Captain of his high school band. He also enjoys playing piano and composing music and cooking.