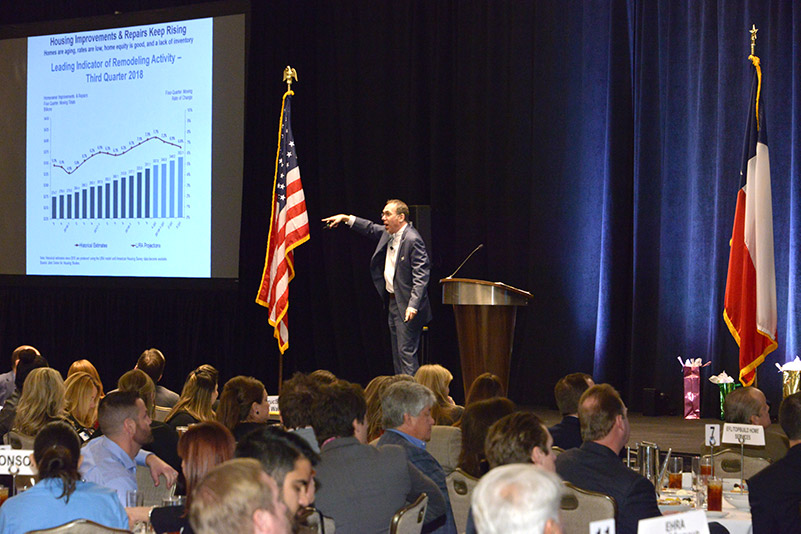 If you were one of the 900+ guests at GHBA’s Economic Forecast Luncheon hoping for good news in the housing market, there were a number of reasons to stay positive. Guest speaker Elliot Eisenberg, PhD, The Bowtie Economist, gave plenty of incentive for optimism.

Dr. Eisenberg predicted that prices aren’t likely to crash the way they did in the bust of 2006 to 2009. During the last boom, buyers, lenders and builders were swept up in speculation, and prices soared even as a flood of new homes came onto the market. That unsustainable combination doesn’t exist today, he said.

Economic conditions are not indicative of a recession in the next 12 months. In 2018 the GDP (gross domestic product), was 3% and Eisenberg sees it dipping only slightly to 2.4% in2019 with a 2% GDP growth in 2020. Several factors exist that are a good sign for the economy: small business confidence remains strong, hotel occupancies are up and new car sales were $17 million for five straight years. Eisenberg added that in 2019 both job growth and take-home pay are looking good and government spending is still stimulant.

Taking these factors into account, he predicts a recession is not probable in the near future but cautions, “after the next 12 months, I’m not so sure.”

Dr. Eisenberg also explained that “housing improvements and repairs keep rising which means that homes are aging, rates are low, home equity is good and lack of inventory growth a bit slower.”

On the more negative side, Eisenberg reported that oil prices have slacked. The higher dollar will impact exports and trade, and interest rates are also up. “Add it all up, the result is not great but is still well above the flat.”

“Corporate profits are higher, but in 2019 they won’t grow as fast as last year,” he stated, “because of tax reform. Last year’s taxes were lower than in 2017, so corporations could show large increases in corporate profit.”

“Our economy can take some hits,” Eisenberg said, “We do have lower oil prices, relatively weak manufacturing, and if car sales did decline, those factors alone can’t hurt us. It would take much more, such as fiscal policy mistakes to make an impact.”

Eisenberg reported that a $250 billion trade war has hurt the GDP, and global growth is slowing down. “China and Japan have had economic problems and in Europe, Germany experienced a recession, and of course add the fact that Brexit is an ongoing crisis right now. All affect our GDP.”

2018 was the best year for the U.S. since the recession ended at the end of 2009. “In five months, this becomes the longest recovery in history,” he stated.

There is nothing resembling a recession in sight. Unemployment is low at 3.7%, people are changing jobs, no one is getting laid off. “That’s a sign of a good market,” Eisenberg said.

From 2010 to 2018, wage growth went from 2% to 3% and inflation has stayed in check. “The federal government just announced it will put the brakes on any increases any time soon, and that’s good news for home builders.”

Single family housing is 2.4% of the GDP. “Housing won’t drive us into a recession,” said Eisenberg, “it’s too tiny. Homebuilders can go into recession but not the economy. We need more houses, desperately!”

The U.S. home ownership rates are rising again. Home prices are up by 3% or 4% because land, labor and materials have increased in cost and wage increases in housing are nearly double the national average. The number of people in construction is 7% less than 12 years ago and home prices are too high to sustain growth. Home inventory has bottomed out and going up. Single family new home sales are down by 3% or 4%.

“The total dollar volume is flat,” said Dr. Eisenberg. “I think pricing growth appears to be topping out.”

Eisenberg concluded by reporting there is not a housing bubble and there is no credit crisis.

“Household debt is down, and we are in great fiscal shape.” The Texas population growth is high and the fastest growing in the nation. Unemployment is very low in Texas and payrolls are up in both Texas and across the country. “Build, build, build!” he said.