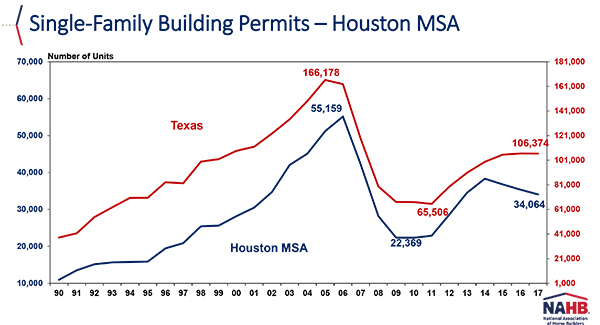 The annual Greater Houston Builders Association’s Economic Forecast Luncheon in January, was held at the Royal Sonesta and hosted over 900 GHBA members. The standing room only crowd was eager to hear the industry forecast for Houston and the nation, with emphasis on the recently passed Republican $1.5 trillion tax bill and the possible post-Harvey effects on the building industry.

The overall outlook for the housing market is positive, according to the economic experts, both sharing presentations that reflected the numbers.

“Even with the general fear of rising mortgage rates, and a labor shortage, the housing market is healthy,” said Robert Dietz. “Houston area builders will benefit from a long-term need for housing. Home buyers may face higher mortgage rates this year, but many will end up with more money in their pockets,” Dietz added. “Preferential rates on capital gains on real estate sales remain unchanged. That profit is a down payment for a new home, a boost for homebuilders’ sales.”

While the $10,000 cap in the property tax deduction will weaken demand in some high-cost, high tax states such as New Jersey, New York and California, fewer Americans will pay the Alternative Minimum Tax, which should offset some of the impact.

The $750,000 mortgage interest deduction cap will only affect a small percentage of mortgages. The NAHB anticipates rates will rise to about 5 percent by the end of 2019.

Ted Jones’s presentation focused on the local economy and Hurricane Harvey recovery and its impact on the area. Jones noted that the Greater Houston area created 45,500 new jobs in just the last 12 months. And, in 2017, there were a record number of home sales, and approximately 30,000 single family starts.

Jones stressed that the immediate impact of Harvey on Houston and the surrounding counties would be loss of jobs and declining home sales but emphasized that it is anticipated six to 12 months out from Harvey there is expected to be a surge in job growth and rising homes sales.

The Treasury Department released new withholding tables based on the recently passed Tax Reform Bill outlining how much to withhold from employees paychecks. 90% of workers should see an increase.

The Houston area is dealing with a very tight labor market with a 4% unemployment rate coupled with 10% job openings.

The oil and gas industry is always a huge concern for the Houston economy and within the building industry. Jones weighed in by noting that technological advances have improved the efficiency of oil and gas production, notably with the advanced development of fracking.

This technology has also impacted the number of rigs in operation which is declining, but that is no longer an accurate barometer of the business as rigs can now perform more efficiently than in the past. These advancements combined with new opportunities to explore and extract oil and gas is good for Houston for years to come.

Will Holder, president of Trendmaker Homes is optimistic that the housing industry in Houston, Texas is strong and expected to continue growing.

“People keep moving here for jobs, for warm weather and for affordable housing,” Holder said. “You can’t not build housing for these folks. There will be a need for 25,000 to 30,000 new homes a year for the next two or more decades.”