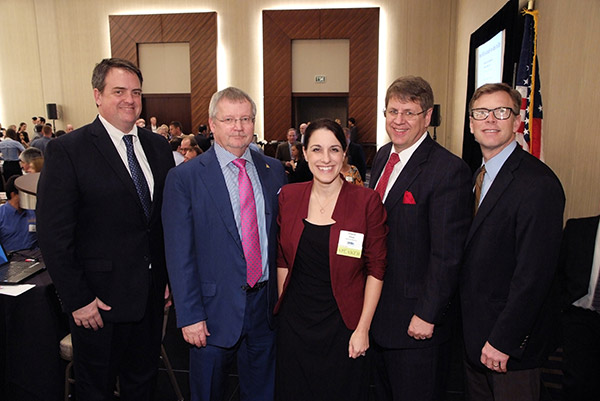 2016 was a roller coaster year for the homebuilding industry, as builders and remodelers faced labor shortages, tanking oil prices, energy-sector job losses and an uncertain national political climate. At the annual Greater Houston Builders Association’s Forecast Luncheon on January 18 at the new Marriott Marquis, three top economists addressed those issues and more, sharing hard numbers and data, along with their predictions for the homebuilding industry in 2017.

According to the experts, the Houston market is poised for a turnaround in 2017. “Hurricane oil is the rearview mirror,” said Patrick Jankowski. “We may see a few squalls and layoffs, but the worst of the downturn is over.”

Houston lost 88,000 jobs — primarily in the energy sector — since oil prices plunged from more than $100 a barrel in late 2014 to a low of $26 a barrel in February 2016, Jankowski said. As oil prices have stabilized in recent months to the mid-$50 a barrel range, Houston’s energy industry is expected to recover slowly.

The experts agreed that the optimal oil price for single family home building and development is between $48 and $85 a barrel. At those prices, pump prices won’t put a huge dent in your pocketbook, but they are high enough for energy companies to stay busy and create jobs. “Any higher, and $3 to $4 a gallon gasoline prices depresses the homebuilding market,” Davis said.

Patrick Jankowki would like to see the oil prices rise just a little higher to bolster the Houston economy. “Houston would grow faster with $60 a barrel oil,” Jankowski said.

While existing home sales saw a record year in 2016, single family permits were down 2 percent. “Several homebuilders have shifted toward smaller homes on smaller lots to bolster sales,” reports Paul Takahashi of the Houston Business Journal.

Scott Davis predicts the number of new home permits will likely remain flat in 2017—though still robust at more than 30,000 starts—then see stronger growth in 2018.

The average home price in Houston has fallen to 2015 levels; the average home sold in 2016 was $266,014. This is good news, according to Davis, who says the biggest threat to Houston’s homebuilding industry as it rebounds from the oil slump is maintaining affordability. “The median home price has grown from three times the median family income to now four times,” Davis added.

Rising mortgage rates may also squeeze some buyers out of the market. Studies still show that only 28 percent of Houstonians can afford the average new home built in the Bayou City, says Davis.

The continued use of Municipal Utility Districts (MUDs) is another crucial factor in maintaining home affordability in the Houston area. Municipal utility districts (MUDs) are government entities that provide water, sanitary sewer, storm sewer/drainage and in some cases streets, parks, and other basic services in subdivisions following developer investment risk, design and construction. MUDs allow homeowners to buy lots and homes at a lower price since initial basic infrastructure expenses in the community are spread over time.

MUDs have come under attack recently, both in the media and proposed State legislation. “Without MUDs, affordability is lost—period,” says Houston area developer Parke Patterson, of Parke Patterson Land Development.

Protecting MUDs will be a priority issue for the GHBA at upcoming Legislative Rally Day in Austin, Texas. “MUDs are crucial to housing affordability,” says Bradley Pepper, GHBA government affairs director. “We want to ensure that our area delegation realize and are able to communicate to their colleagues in the legislature that the use of MUDs is an essential tool for the business of land development and homebuilding.”

“People have moved here because of affordable homes in good school districts,” Davis said. “MUDs have been a critical tool for the last 40-plus years in that effort.” If MUDs go away, Houstonians would see a 10 to 15 percent increase in housing prices, not immediately, but over the next three to four years, Davis added.

The big unknown in all of this is President Donald Trump’s impact on the national homebuilding industry, said Elizabeth Simas.

Trump made many campaign promises, including revising the tax code which could create more disposable income and spur the economy. He also wants to invest $550 billion into new U.S. infrastructure, creating thousands of new jobs.

Overhauling immigration is also a top priority for the new Administration. With the current labor shortage already paining builders, it remains to be seen how this will affect the industry.

Simas said she believes Trump would be the most successful in decreasing building regulations, something that would help Houston homebuilders by reducing the time and cost of building a home. In turn, those savings would increase affordability for home owners.

“Trump is committed to the idea of less building regulation,” Simas said. “I believe he can be successful in following through on this. We won’t see a lot of new regulation, but rolling back of regulations.”

The final takeaway: Stay calm and profit on!

Special thanks to Greg Tomlinson, president and owner of Builders Post-Tension; and Terry Swenson, The Writer’s Block, for their assistance and insight.