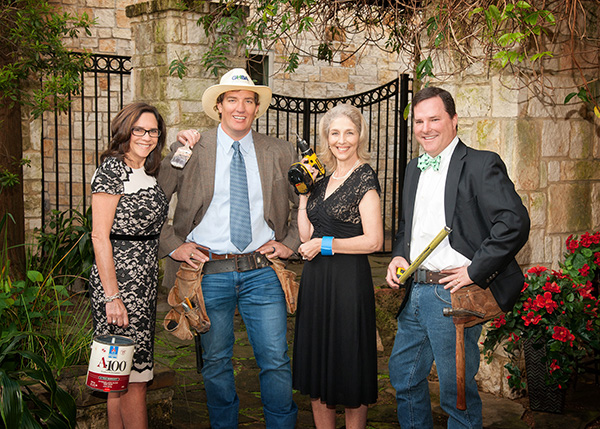 The Greater Houston Builders Association (GHBA) and HomeAid Houston were honored as the “2017 Groups of the Year” by Casa de Esperanza, a charitable organization that provides a safe and nurturing place for children in crisis due to abuse, neglect or the effects of HIV.

The awards were presented at Casa de Esperanza’s “Building Hope for Children” gala on Sunday, April 23, 2017, at the Hobby Center for the Performing Arts. Both GHBA and HomeAid will also receive a ceremonial brick on Casa’s “Path of Hope.”

GHBA and HomeAid were chosen for the Group of the Year distinction because of their ongoing efforts to further the mission of Casa de Esperanza. Members and staff have contributed countless hours of volunteer service, along with thousands of dollars worth of donated materials and labor.

“It is the generosity of these volunteers that allows Casa de Esperanza to continue to grow and serve abused, neglected and HIV positive children and their families,” said Shelley Star, Casa de Esperanza. “We cannot thank you enough for the work you’ve done to help our organization.”

How it all began… Two years ago, Shelley Star, Casa de Esperanza’s associate director, was a guest at HomeAid Houston’s annual HALO (HomeAid’s Amazing Ladies’ Organization) Luncheon, where she met Bette Moser, the agency’s executive director. When Bette learned that over 70 percent of Casa de Esperanza’s birth parents and children were homeless at the time the children were admitted to the agency, she knew that HomeAid and Casa de Esperanza could form a strong partnership to help change the lives of these children. This partnership has flourished ever since.

In October 2015, the GHBA Custom Builders Council teamed up with HomeAid Houston to update and renovate a house that has been home to 94 children since it was built in 2007. In addition to the needed repairs, new appliances were purchased and installed. The GHBA volunteers worked together and new friendships were created throughout the day. In April 2016, volunteers from the Custom Builders Council once again showed up in full force to provide a landscape project for the Casa de Esperanza neighborhood. They returned again in September to remodel two more homes on the property as well as donated all new appliances.

“Casa de Esperanza, Home Aid Houston, and the GHBA share the same goal: to make our community a better place for children and their families.”Shelley Star, Casa de Esperanza

Also in April 2016, the GHBA Remodelers Council began remodeling the Fort Bend home that was donated to Casa de Esperanza by The George Foundation in 2001. This home has become the heart of the Fort Bend program and through its doors, more than 50 children have been in foster care. The home has also hosted various events for the foster and adoptive families in the Fort Bend area.

Luke was born weighing 6 lbs. and 13 oz. and came to live with Mary at five months old, weighing only 7 lbs. Diagnosed with cerebral palsy and epilepsy, he was very hard to feed due to the brain damage he suffered at birth. However, he was a fighter and a survivor and, while his first four years were a struggle, Luke is now over 70 pounds. As Luke grew, Mary found it nearly impossible to navigate their two story home with him—until the GHBA Remodelers Council stepped in.

The work of the Remodelers Council was life changing for Luke, his mother and caregivers. Mary now shares how happy Luke is with the changes to his home.

“There are no words to describe Luke’s joy when he uses his new lift to transfer him from his bed to his wheelchair (he thinks it is much like a roller coaster ride), when he plays in the water at his new sink, and when we wheel his chair into the shower.”Mary Scalise, Casa de Esperanza’s Fort Bend Program and Parent Case Work Coordinator

Throughout the past year GHBA has continued to provide a number of maintenance and refurbishment projects for Casa de Esperanza. Donna Buenik, director of builder programs at GHBA, has been a most valued resource to Casa de Esperanza. Through Donna’s strong networking, GHBA and the Custom Builders Council have purchased furniture, arranged for air conditioning units to be installed at very deep discounts, and arranged roof and gutter repairs. This spring they are once again doing a planting project and sprucing up several homes.

“We are grateful to HomeAid Houston and the Greater Houston Builders Association and delighted to welcome them to the Casa de Esperanza family,” adds Shelley Star. “Casa de Esperanza, Home Aid Houston, and the GHBA share the same goal: to make our community a better place for children and their families.”

To learn more about Casa de Esperanza and the wonderful work they do in the Houston community, visit www.casahope.org.