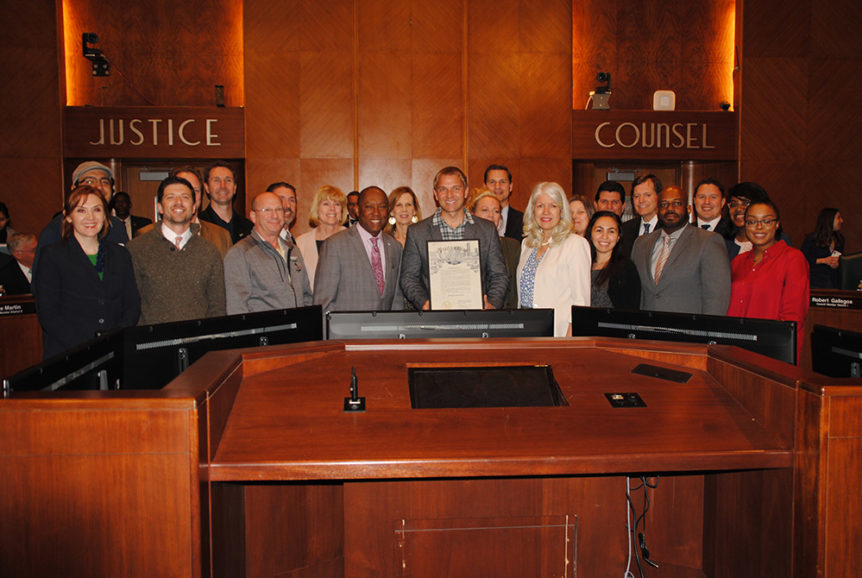 Mayor Sylvester Turner declared March 19, 2019 “BuildAid Houston Day,” as he presented BuildAid with a City of Houston Proclamation at a ceremony held at City Hall in the Council Chambers. The proclamation lauded BuildAid’s accomplishments post Hurricane Harvey as a HomeAid/GHBA initiative fostered by David Weekley through the David Weekley Family Foundation. This proclamation was sponsored by Council Member Karla Cisneros from District H.

BuildAid provides assistance to low income homeowners whose homes were devastated by the floods and had no insurance. Once pre-qualified, these homeowners are matched with experienced builder members of GHBA who will walk them through a finish selection process and the actual remodeling.

At the ceremony, Mayor Turner also acknowledged the $5.5M grant BuildAid received early-on from the Hurricane Harvey Relief Fund (HHRF) and a $350,000 grant from the Rebuild Texas Fund. The HHRF was established by Mayor Turner and former Harris County Judge Emmett and was administered by the Greater Houston Community Foundation.

The ceremony wrapped up with council members Mike Knox, Greg Travis and Dwight Boykins addressing the BuildAid representatives and chambers. All three recognized the commitment, vision and success that BuildAid has maintained since the initiative was formed after Harvey.

To-date BuildAid has completed 101 homes with 60 homes under construction. Approximately 64 homes are past application and on the path to construction, with new applications in the pipeline.