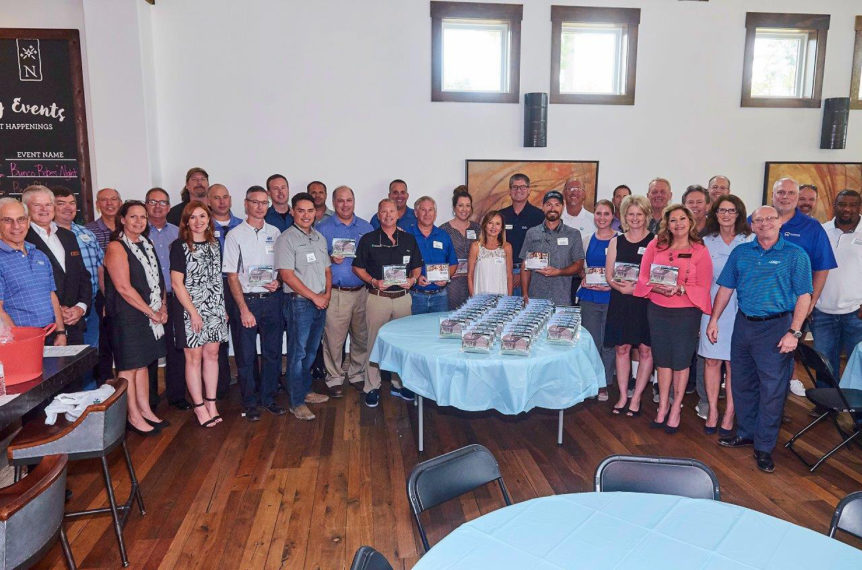 Proceeds from the sale of the home go to HomeAid Houston and Operation Finally Home.

Representatives from many of these companies were on-hand for a Vendor Appreciation Luncheon held at The Retreat, the NorthGrove community center. Guests were treated to a barbecue buffet that was sponsored for the 14th year by Allpoints Surveying Group, with Jeff Solomon and Kendall McDermott overseeing the lunch.

Representatives from the charities, the GHBA and the builder/developer teams showed their appreciation of the record donations by saying a few words. Speakers were Casey Morgan with GHBA; David Assid with Toll Brothers; Scott Merovitch with Chesmar; Lee Kirgan with Operation Finally Home; Carole Brady with HomeAid Houston; and guest speaker from Gracewood, an agency who has partnered with HomeAid on several projects, Jenny Rice Cotton.

Jenny addressed the crowd of nearly 60 people by sharing Gracewood’s appreciation for the donations and commitment of the Benefit Homes vendors. She also read a letter written by a mother who is working her way toward rebuilding her life while living in one of the many cottages built by HomeAid.

“Chesmar Homes has enjoyed participating as builder captain for the GHBA Benefit Homes charity fundraiser every one of our six years,” said Scott Merovitch. “It’s such a tremendous opportunity to be able to provide funding to two outstanding organizations like HomeAid Houston and Operation Finally Home, through the construction and sale of this new Chesmar home. We are extremely grateful to all of our vendors, suppliers, and trade base that generously gave financially towards this project.”