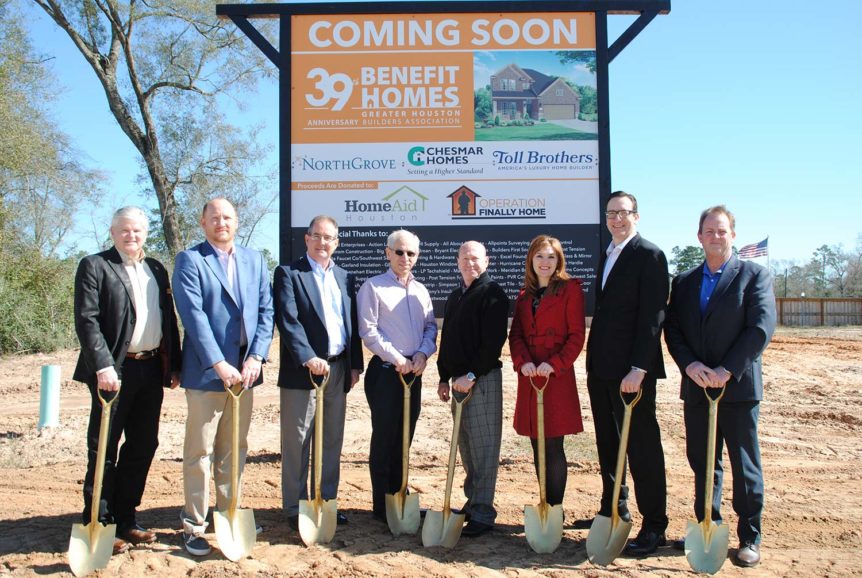 More than 70 GHBA members, including vendors and trades, gathered at The Retreat Community Club in the Toll Brothers’ neighborhood of NorthGrove to help mark the official groundbreaking of the first Greater Houston Builders Association Benefit Home for 2019.

Chesmar Homes and a number of guest speakers led the ceremony. From Chesmar was Scott Merovitch, Houston division president; from GHBA were John Williams, president and Casey Morgan, CEO; from Toll Brothers was David Assid, division president; and representing the charities were Lee Kirgan, vice president of construction for Operation Finally Home (OFH) and Patrick Mayhan, president of HomeAid Houston.

Because of the generous donation of materials, labor and services, the majority of the proceeds from the sale of this Benefit Home will be donated to HomeAid Houston and Operation Finally Home. Since the project began 39 years ago, $11 million has been raised. This is Chesmar’s sixth Benefit Home.

“It was such an incredible event to mark the beginning of construction with the 70 vendors who joined in the groundbreaking celebration,” said John Williams, GHBA president. “All Benefit Home groundbreakings are huge milestones for the charities and the entire GHBA and the builder/developer teams. The energy and excitement of the occasion is an inspiration to everyone who attends.”

NorthGrove is located off FM 2978 in Magnolia, Texas in southern Montgomery County. The community is conveniently located within minutes from The Woodlands while offering a more intimate small town feel. It is also just a short drive from major employers, shopping centers, al fresco dining, and cultural centers.

The community is over 200 acres of preserved green space, hike and bike trails, natural waterscapes, luxury outdoor gathering spaces, three community lakes and a 7.5 acre recreation center called The Retreat. This center gets its name for the 9,400 sq. ft clubhouse that is a contemporary lodge design and features numerous amenities.