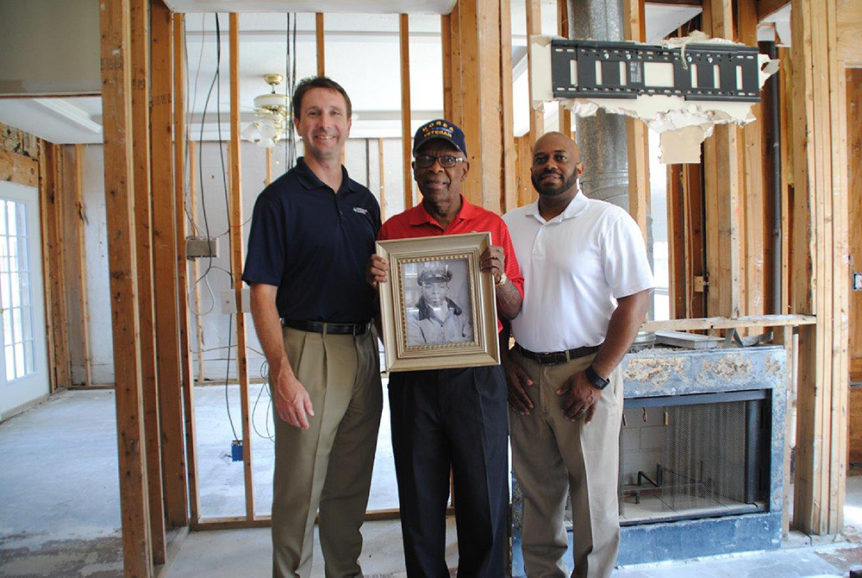 HomeAid Houston partnered with the David Weekley Family Foundation (DWFF), to form BuildAid Houston just days after the storm passed. Combining the knowledge and history of HomeAid’s 15 years as a charity of the GHBA, relying on the commitment and strength of the GHBA’s builders and remodelers, and partnering with community funders, including the Hurricane Harvey Relief Fund, which granted BuildAid $5.5 million, BuildAid is now operating in many sectors of Houston, helping hurting homeowners restore their homes.

Where are they now?

A series devoted to sharing homeowners’ stories as they work with BuildAid to restore homes and rebuild lives.

A four-foot wall of water surged from Cypress Creek down Gore Grass Court, just days after Hurricane Harvey had moved out of the area, forcing 85-year-old Korean War Veteran Charles Smith and his wife Vilayphone to flee their 3,200 sq. ft. home they had lived in over 20 years. They walked in muddy water for a half a mile through their neighborhood, where their daughter was waiting at Spring Stuebner Road.

The Smith’s eventually returned to find, like thousands of others, that four feet of water had destroyed their first floor. With no flood insurance, the Smith’s first turned to FEMA for help. The Smith’s received $28,000 to begin cleaning up and treating their home for mold. They covered the rest of the remediation and debris removal with their savings.

“I never thought at 85 years old, and 20 years of that in the Navy, I would be nearly homeless. But finding BuildAid and our build leader James Boone and Chesmar Homes, has changed the course of our lives. They have given me reason to look forward to turning 100!”Charles Smith, BuildAid recipient

The Smith’s realized they needed more help to rebuild. After learning about BuildAid from an article in the Houston Chronicle, they completed an application form on the BuildAid website. Once qualified, they were matched with a BuildAid builder partner from Chesmar Homes, one of several experienced builder members of the GHBA. From there they worked directly with their builder to prepare their materials selection package.

It’s been nearly a year since the Smith’s home flooded like thousands of others. But their restoration process has begun and they anticipate, with the help of their builder they will be in their restored home by October.

“I never thought at 85 years old, and 20 years of that in the Navy,” said Charles, “I would be nearly homeless. But finding BuildAid and our build leader James Boone and Chesmar Homes, has changed the course of our lives. They have given me reason to look forward to turning 100!”

“Stories of survival and loss, resiliency and hope continue to emerge from the devastating effect of Hurricane Harvey, even a year later,” said Chris Yuko, director of BuildAid. “The personal stories are all different, the locations vary, but the life altering impact of 51 inches of non-stop rainfall on the landscape and fabric of a community remains a constant. We are proud to be able to help change the course of so many homeowners’ lives through this valuable initiative.”