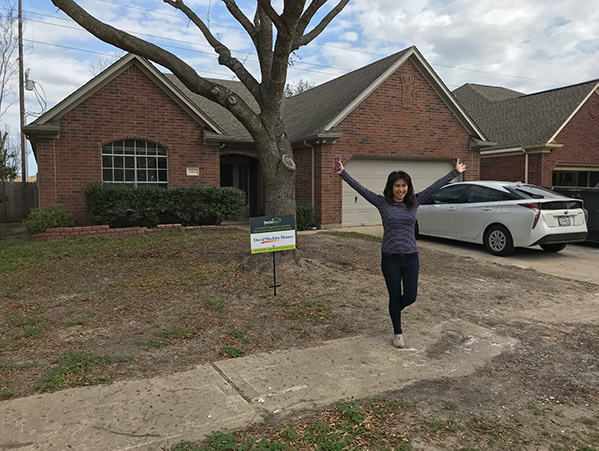 Fredrick and Alta Hodges, longtime homeowners and empty-nesters in the Katy area, woke up on August 25 to the beginning of Hurricane Harvey’s churning rain, lightning and wind that was being felt throughout the city. By the 29th, they and dozens of their neighbors were being rescued by the Coast Guard, as several feet of water would flood their homes by the end of the day.

“It was surreal, we were in shock,” said Fred Hodges. “When the Coast Guard pulled up in rubber boats, it was like something out of a movie.” Ultimately, the Hodges home flooded with two and a half feet of water. It would be 10 days before they could return. “Those 10 days were agonizing as we worried about mold. We didn’t know where to turn for help.”

“The entire team that is making BuildAid happen reflects the generous heart that defines Houston and our housing industry. Harvey left behind so much destruction, but that only uncovered the true nature of who we are as citizens of this great city.”Bette Moser, Executive Director of HomeAid Houston

This scenario played out for thousands of Houstonians. Many today still search for assistance, unable to repair their homes. The Hodges felt fortunate to learn about BuildAid, a HomeAid Houston rebuild initiative, that was inspired by David Weekley with a donation of $1 million from the David Weekley Family Foundation (DWFF). Months later, because of the great demand by displaced homeowners and the track record of HomeAid Houston, BuildAid was granted $5.5 million from the Hurricane Harvey Relief Fund, which was established by Houston’s Mayor Turner and Harris County Judge Emmett. These funds, along with other donations from Houston community members, are playing a critical role in BuildAid’s effort to rebuild homes across Houston.

GHBA builders are given a home to restore in neighborhoods that fit their geographical preferences. Once matched with pre-qualified homeowners, the builder will walk them through a finish selection process. The scope of services provided to a homeowner varies by household but typically includes the following cost categories: insulation and drywall, tape and float, texture and paint, cabinetry, countertops, millwork and trim, door hardware, plumbing, kitchen and bathroom tile, pre and post-construction inspections and final clean. The builder will provide a detailed, line item estimate of the rebuild and will manage the construction process from beginning to end.

Once the rebuild is complete, the builder will submit an invoice to HomeAid Houston and all trade expenses will be reimbursed. David Weekley Homes, Partners in Building, Trendmaker Homes, Taylor Morrison and Chesmar Homes committed early on to the program. After a recent builder recruitment meeting, several more builders will be joining the team in neighborhoods of their choice.

Homeowners who are interested in being considered for a BuildAid restoration can access the initial application at buildaidhouston.org; by calling 409.768.0118; or emailing their basic information to help@buildaidhouston.org.

Low-to-no interest financing will be available for the work being performed. In some cases, homeowners may qualify for a grant.

BuildAid is being directed by Chris Yuko, with the DWFF. With the growing number of homeowners being served, BuildAid has added several additional staff that include Client Services Manager Bob Sutton, Construction Manager James Boone, and builders Neil Smolik and Randy Rowlett.

“We are excited to add more homeowners to our program, and more builders to help in their restoration process,” said Chris. “We currently have 38 homes in the application phase and are anticipating this number will grow quickly as word continues to spread about this incredible opportunity. We cannot thank enough the many GHBA members who are making this initiative possible.”

“The entire team that is making BuildAid happen reflects the generous heart that defines Houston and our housing industry,” said Bette Moser, executive director of HomeAid. “Harvey left behind so much destruction, but that only uncovered the true nature of who we are as citizens of this great city.”

Update: Fred and Alta Hodges are now living in their newly restored home and are looking forward to their retirement.