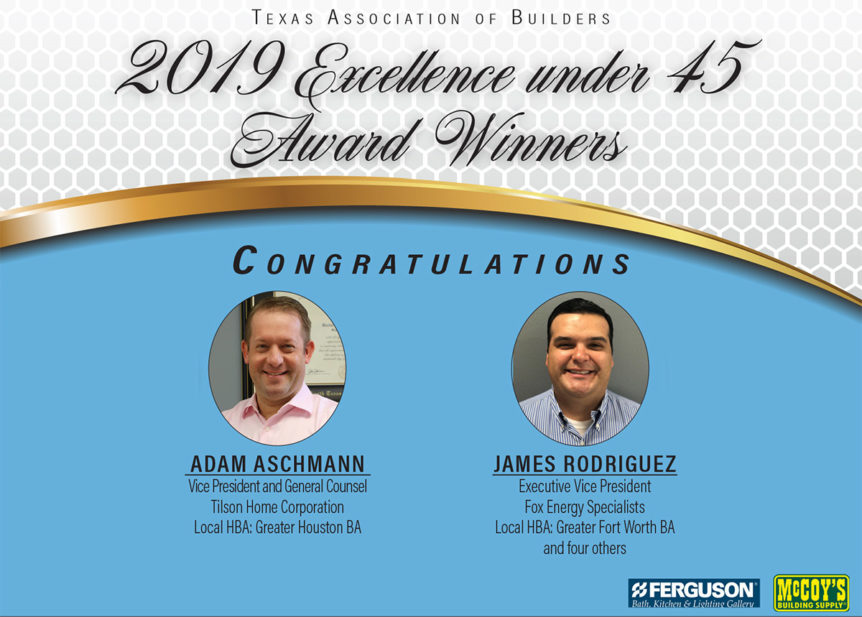 The Greater Houston Builders Association (GHBA) is proud to announce that two local members were honored with the 2019 Excellence under 45 Award. Presented annually by the Texas Association of Builders (TAB), the Excellence under 45 Award acknowledges and honors the exceptional young professionals who have committed their time, efforts and careers to the Texas building industry.

GHBA members Adam Aschmann and James Rodriguez are to be showcased as future leaders of the industry across the state of Texas. Each will be recognized during the Star Awards cocktail reception and presentations that will be held on August 8 during the Sunbelt Builders Show™ at the Gaylord Texan in Grapevine, Texas. Their unmatched enthusiasm and love for building proves that the future of the residential homebuilding industry is in good hands.

The awards program was created and developed by the TAB Young Professionals Council. To be nominated for this award, each young professional must be employed by an active member of TAB and be between the ages 21 and 45. The awards program provides industry education and networking for professional growth in the residential building industry, and helps program participants become better, more knowledgeable, and more productive employees.

Aschmann grew up in the plumbing industry, working for his father’s plumbing company in upstate New York. This provided him the opportunity to work on new construction and development sites where he found fulfillment in putting together pieces that would ultimately have an impact on someone. Through his professional growth and serving on numerous GHBA and TAB committees and councils, Aschmann became a founding member of the NAHB Young Professionals Committee and in 2017 served as NAHB’s Young Professionals chairman. As part of his responsibilities, he helped develop a nationwide strategic plan to help encourage, retain and promote young professionals in the homebuilding industry. This included a national awards program, developing toolkits for student chapters and those interested in establishing YP committees at their local, and various grassroots outreach programs.

Rodriguez also grew up in the industry as his family owned a housing consulting business. After working on the political front lines in Washington D.C., Rodriguez developed an interest in public policy and politics. That experience and passion paid off during the economic downfall in 2008 when he had to secure new government contracts from Texas’ Gulf Coast region to the Panhandle. At the state level, Rodriguez is active on the YP Council, board of directors, Government Relations, Code and Standards, Sunbelt Builders Show™ and Membership committees as well as the Texas Builders Foundation board of trustees. He has also served on the Greater Fort Worth BA’s YP Council since its establishment in 2014 and remains active on the GFWBA board of directors.

ABOUT TAB: The Texas Association of Builders (TAB) is a trade association serving the needs of homebuilders, remodelers and land developers throughout Texas, as well as the companies that service them. Founded in 1946, TAB is an affiliate of the National Association of Home Builders (NAHB) and has 27 local home builders associations and nearly 11,000 members across Texas. Representing over 723,058 jobs and more than $67.5 billion annually in the Texas economy, the state and local associations play a crucial role in providing housing for Texans. For more information about the Texas Association of Builders, visit www.TexasBuilders.org.