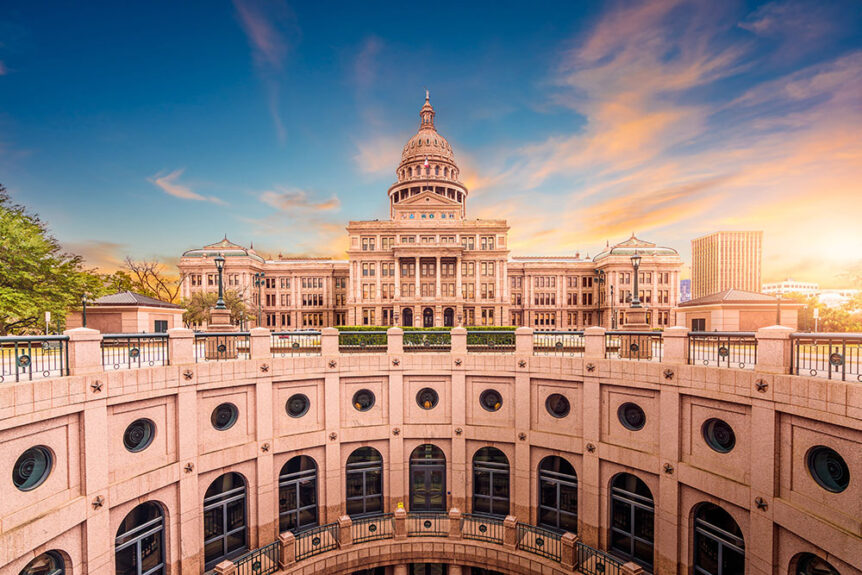 As we anticipate a new calendar year, it is only natural to reflect on and evaluate what has happened over the last 12 months. The first question is always, “where did the time go?” It was no different for GHBA government affairs in 2021.

We entered 2021 following a year which gave us the first global pandemic in over 100 years. While we are still living with COVID-19, this year saw much of our daily lives get back to “normal.” With social gatherings, sporting events, schools open in-person, etc. we have been able to put those quarantine months of 2020 in the rearview. We still have a long way to go to put these past two years behind us, but we’re moving in the right direction.

On January 12 at noon, members of the Texas Senate and House of Representatives gathered in their respective chambers at the Capitol to convene the 87th legislative session. That would begin the 140-day countdown to Sine Die (end of regular session) on May 31.

The legislature only meets every odd-numbered year beginning on the second Tuesday in January. From there members have 140 days to complete the business of the state.

In years past, a legislative session has meant one thing for the GHBA: Rally Day! Rally Day is a special opportunity for our members to meet and directly engage with our state delegation members on issues and legislation that affect the housing industry.

However, this year’s edition of Rally Day was very different from the past. On Tuesday, April 13, GHBA members participated in COVID-19’s version of the Texas Association of Builders’ Rally Day in Austin. With health and safety protocols still the highest priority and wanting to be a responsible community partner, Rally Day was much smaller than it has been in the past.

Historically, we would have taken three busloads of roughly 150 GHBA members for a day of meetings at the Capitol with our state delegation members. This year, we had 30 members make their own travel arrangements and gather at the Hyatt Regency where elected officials and staff met with us to discuss issues and legislation that affect the housing industry.

We were not shut out of the Capitol entirely though as several elected officials requested that we meet with them in their offices, so two small teams of GHBA members made their way to the big pink granite building to meet with members on their turf.

A big win for the industry was Senate Bill 877 that was signed by the governor on June 8 and was effective immediately. It requires cities to accept independent third-party inspections by qualified professionals during a declared disaster to help tackle the backlogs experienced in disaster areas. Using this tool will reduce project wait times and keep the residential construction industry operating as efficiently as possible during declared disasters.

With a few of his priority issues not being passed during the regular session, Governor Abbott called a special session in July and included subjects for consideration regarding bail reform, election integrity, border security, property tax relief, teacher retirement payments and of course, funding the legislative branch of the Texas government.

After meeting for a couple of days to start the session, in protest of controversial election reform bills, more than 50 House Democrats boarded planes and headed to Washington, D.C. This prevented the House from reaching a quorum, which precluded them from pursuing any legislation.

The result of that exodus was the second special session which began on August 7, immediately after the 30-day time limit ended.

The governor rolled over most of the items on the first call, while adding the appropriation of more than $10 billion for COVID-related healthcare expenses and the discussion of COVID strategies and requirements for school-aged children returning to class.

On August 23, after more than six weeks of not being able to achieve a quorum, enough House Democrats returned to the chamber to allow the House to begin to conduct business prior September 2 deadline.

After nearly 60 days of being in two special sessions, there were 15 bills passed. Topics included bail reform, election reform, funding for border security, an extra paycheck for retired teachers, property tax relief and fully funding the legislative branch of the government.

On September 20, the legislature began its third special session in Austin. Included on the call was redistricting, the appropriation of billions of American Rescue Plan Act (ARPA) dollars, property tax relief and whether state or local governments can mandate COVID-19 vaccines.

The focus of the third special session was on redistricting, which is redrawing the state’s legislative districts. The state is required to redraw political maps every 10 years following the results of the census.

The result of these new maps will be seen with the upcoming Democratic and Republican primary elections because every district in Congress, the Texas Senate and the Texas House will be on the ballot in 2022.

The City of Houston’s Redevelopment & Drainage Taskforce, which the GHBA has participated on since its creation in 2018, was tasked with considering and reviewing the new proposed rates. Due to requirements from Harris County to be eligible to participate in future flood control bond projects, it was necessary for the City to meet the minimum threshold for detention rates that the county had previously adopted by December 31. However, the city abandoned its evaluation process and adopted new criteria that far exceeded that of Harris County on January 4, without final review or discussion with the taskforce or development stakeholders.

Initially, these new requirements were intended to take effect on February 4, but after feedback and discussions with the GHBA and other development stakeholders, the city pushed the effective date to April 1.

The original draft released by the city would have reduced the square footage of lots eligible for exemption from on-site detention from the current threshold of 15,000 sq. ft. to 7,500 sq. ft. with less than 65% impervious cover. This would have been terribly onerous, expensive, and in many cases not buildable on lots from 7,501 sq. ft. to 15,000 sq. ft.

After working with the GHBA, development stakeholders and neighborhoods, the City of Houston Public Works decided to retain the exemption for 15,000 sq. ft. lots and less with 65% impervious cover.

These new requirements were adopted without input from stakeholders or the development community. Included in the new regulations are 80 ft. minimum lot sizes and 8-inch minimum road thickness if you intend for the county to accept your roads.

In June, the Houston City Council adopted new Water and Wastewater Impact Fees that became effective on July 1, 2021. Impact fees are charged to developers before a newly developed property can connect to the city’s water and sewer systems.

Cities are required to update these every 10 years. The new fees were originally slated to take effect on July 1, 2020, but were delayed one year by the governor’s office because of the pandemic.

A service unit is defined as an equivalent dwelling unit (EDU) and is based on the amount of water consumed and wastewater generated by a typical single-family residence.

The new fees effective July 1 are:

In 2020, the Texas Department of Licensing and Regulation adopted the 2020 National Electric Code (2020 NEC) with an effective date of November 1, 2020. That adoption included Section 210.8(F) of the 2020 NEC which requires that certain outdoor outlets for dwellings supplied by single phase branch circuits rated 150 volts to ground or less, 50 amperes or less, have ground-fault circuit interrupter (GFCI) protection.

GFCIs are a safety device that acts as a fast-acting circuit breaker designed to shut off electric power in the event of a ground-fault within as little as 1/40 of a second. As a result of this new requirement, there have been widespread reports of certain types of air conditioning units connected to a GFCI device not being compatible with the GFCI protection, which causes the GFCI device to trip.

Due to this feedback, last month, the Texas Commission of Licensing and Regulation held an emergency meeting and found that compliance with Section 210.8(F) can interfere with the proper functioning of certain types of air conditioning and heating systems.

These malfunctions could pose a threat to public health and safety and as such, they voted to delay implementation of this section until January 1, 2023.

While there are several issues still affecting the homebuilding industry, including supply chain issues, new regulations and codes being enacted and an upcoming elections year, we have been fortunate as an industry to continue to build, remodel and develop over the past two years. As always, the GHBA will continue to advocate for a regulatory environment that will help the industry continue to thrive in 2022.

The GHBA Government Affairs team thanks everyone who contributed their time and effort during this year. Thank you! Without your support and focus on advocacy, our industry would not be the driver of the Texas economy that it is today. We look forward 2022!